Premier Daniel Andrews has been blasted by politicians, small businesses and public figures over his decision to extend draconian stage four lockdown for another two weeks.

Small Business and Family Enterprise Ombudsman Kate Carnell said owners are struggling under the weight of costs, including rent, equipment leases, loans and an accumulation of worker entitlements.

‘What small businesses are telling us is that they are giving up,’ she told Nine’s Today program on Monday. 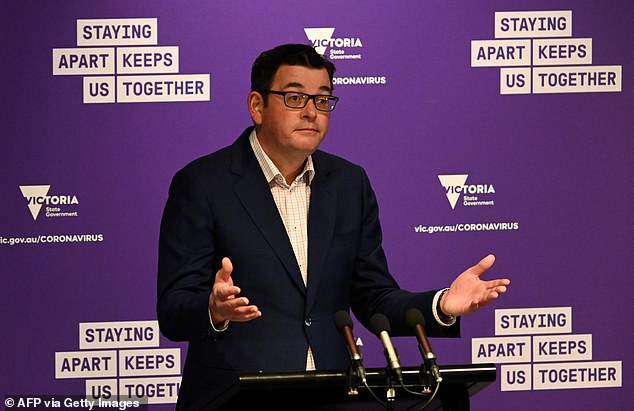 Premier Daniel Andrews has been blasted by politicians, small businesses and public figures over his decision to extend draconian stage four lockdown for another two weeks

‘For many of them, they are not going to be open until the end of November.’

Ms Carnell said the Victorian government needed to step up and pick up some of the more prohibitive costs such as break lease fees, because ‘its not the business’ fault that they can’t open, it’s the government’s’.

‘We are talking to the Victorian government and they will have to come to the party.’

Melbourne’s stage four restrictions will remain for another two weeks, although from September 14 the nightly curfew will start an hour later at 9pm and run until 5am.

People living alone will also be able to nominate a friend or family member who can visit, while two hours of daily exercise will be allowed, including ‘social interactions’ such picnics in parks or reading books at the beach.

The curfew won’t be lifted until October 26, with people able to leave home for non-essential reasons.

The lockdown will only lift on that date if the average number of new cases falls below five and there are fewer than five unknown source cases.

Up to five visitors from a nominated household and outdoor gatherings of up to 10 people will also be allowed.

‘I want a Christmas that is as close to normal as possible and this is the only way, these steps are the only way that we will get to that point.’ 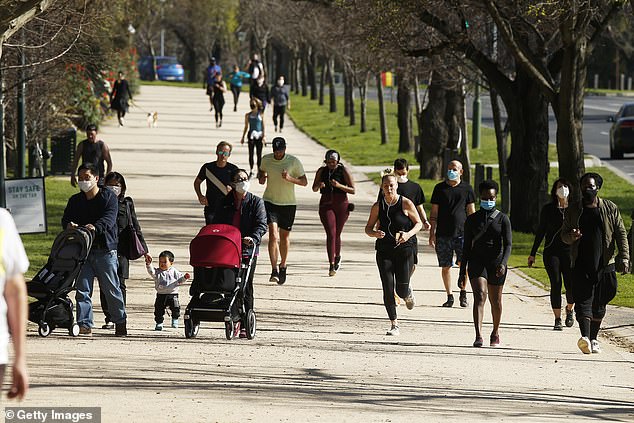 Melbourne’s stage four restrictions will remain for another two weeks, although from September 14 the nightly curfew will start an hour later at 9pm and run until 5am 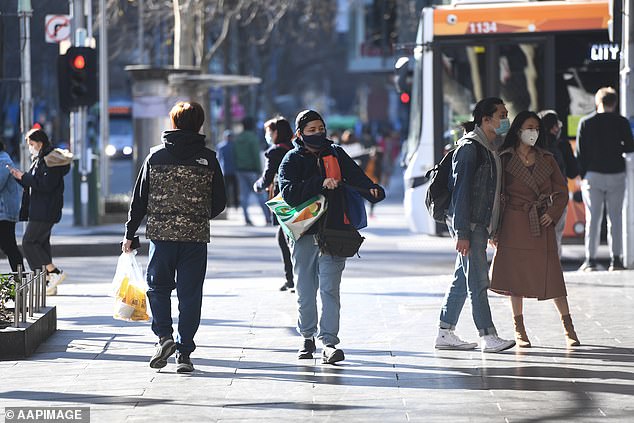 The premier said the nominated 14-day average of five cases provided a 97 per cent chance of avoiding having to go back into lockdown.

Victoria’s average daily number of cases during the previous 14 days was about 100.

‘If you open up at that level you are not open for long,’ he said.

The last step will come into effect from November 23, if Victoria goes 14 days with no new cases, allowing public gatherings up to 50 people and 20 home visitors at a time.

All remaining restrictions will be removed when Victoria goes 28 days with no new cases, although masks will likely remain compulsory for some time.

Regional Victoria, however, will be able to move to the third step of restrictions ‘quite soon’.

Victorian Chamber of Commerce and Industry chief executive Paul Guerra was among a chorus of business critics who said the plan did not do enough to protect struggling businesses.

‘We were hoping for a road to recovery. Today we have been delivered a road to nowhere,’ he said.