A group of Western Australian health workers could be stuck in Victoria for weeks after one of them tested positive to COVID-19.

The nurse had been working in an aged care home in Melbourne as part of a WA volunteer team including five other nurses and a support worker.

Health Minister Roger Cook has confirmed the nurse is isolating in a ‘Hotel for Heroes’ emergency accommodation facility. 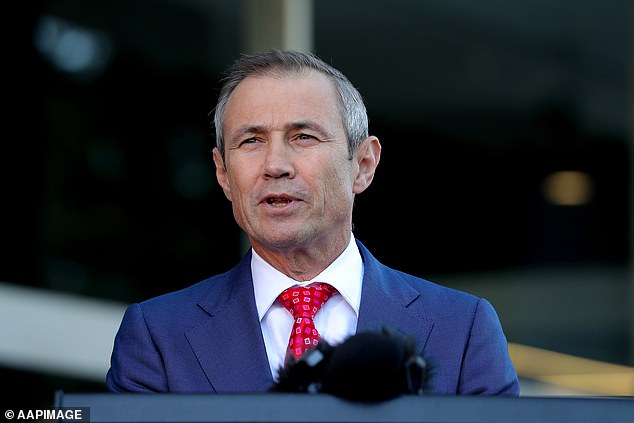 He has not ruled out the health workers being forced to quarantine for two weeks in Melbourne then a further two weeks upon returning to WA.

‘We will consider all options – whether it is to get them out now, care for them in the hotel for heroes facility where they would be looked after by great health and welfare teams, or whether we get them back by some other means,’ Mr Cook said on Tuesday.

‘I’m taking advice from the chief health officer and the state emergency coordinator just to make sure we do the right thing.’

Mr Cook said he was not aware of the nursing union’s claims the health workers had been told they would be airlifted out of the state.

He said the nurse had mild symptoms including a dry cough but was otherwise ‘relatively comfortable’.

The other members of that team, who returned negative tests, are isolating in a separate Melbourne hotel and have not shown any symptoms.

‘Obviously we want to do the very best by these nurses … but we also need to understand that there’s an infection control risk that we have to manage as well,’ Mr Cook said.

‘Our principle here is that these nurses stepped up to the plate in a time of crisis and a time of need and we will do everything that we can to support them.’

He said all three teams were nearing the end of their stints and he did not expect WA to send more volunteers given the situation in Victoria had improved.