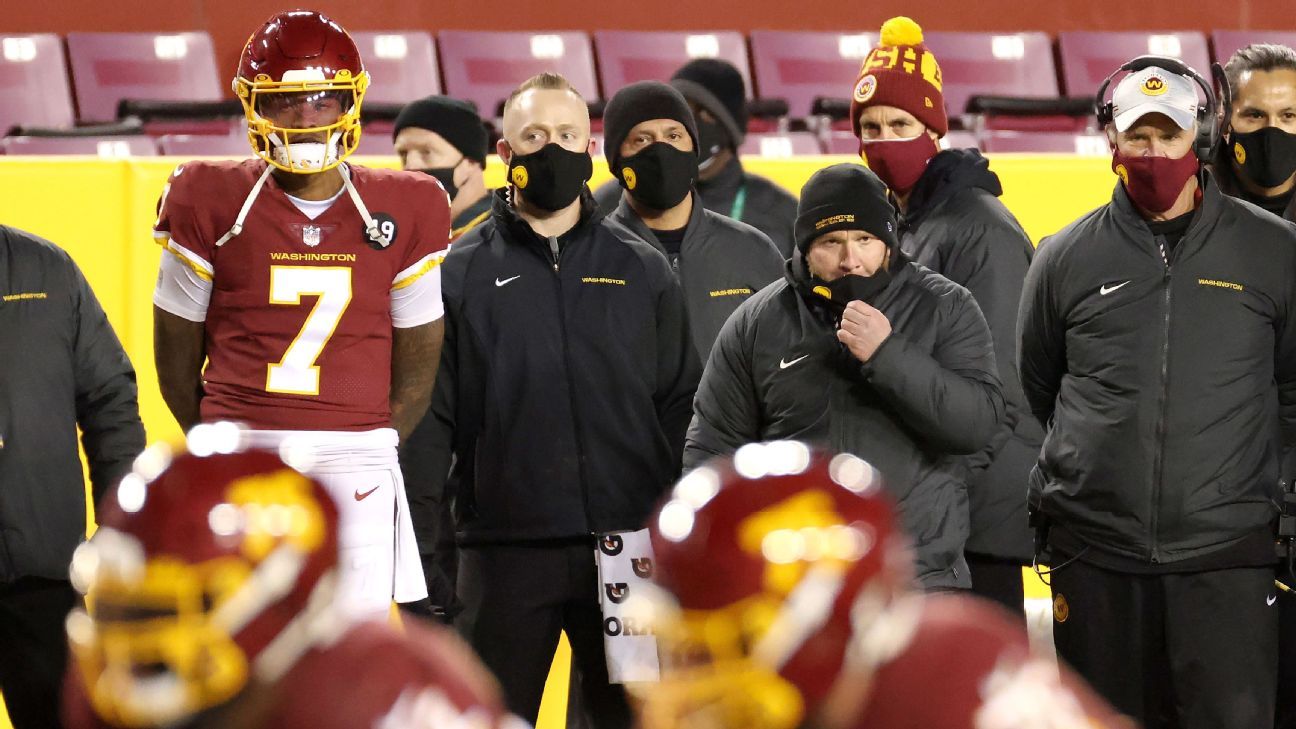 LANDOVER, Md. — Washington Football Team quarterback Dwayne Haskins Jr. opened the day as the starter with a chance to redeem himself. He exited with plenty of questions surrounding his future, calling the past week the toughest of his life.

Washington benched Haskins in the fourth quarter of Sunday’s 20-13 loss to the Carolina Panthers. He completed 14 of 28 passes for 154 yards and two interceptions.

“Definitely the hardest week of my life. I just want to bounce back and move forward and pray and get my life together,” Haskins said. “I can’t really put into words how I’m feeling right now.”

Coach Ron Rivera isn’t sure yet who will start next Sunday’s season finale for Washington (6-9) at Philadelphia. If Alex Smith‘s strained right calf is healthy, then he will start. But if Smith can’t play, Rivera was noncommittal over who would start.

“You sign up for this job, so it is what it is,” said Haskins, who spoke to reporters from his home after Sunday’s loss. “Sometimes being human isn’t enough. You’ve got to own up to your responsibilities and mistakes and put your best foot forward and pray for an opportunity. … You never know when you’ll get another one.”

Sources told ESPN’s Adam Schefter that Haskins did not turn down requests to speak to the media and was informed that backup quarterback Taylor Heinicke would be meeting with reporters and that Haskins could go home.

Haskins was downcast during his videoconference call, clearly understanding the opportunity that was lost just one week after getting it.

But after he violated another COVID-19 protocol — he wasn’t wearing a mask at his girlfriend’s birthday party where more than 10 people were present — he was fined $40,000 and stripped of his captaincy. Then, Sunday, he was benched.

“We didn’t get anything going, so I decided to make the change,” Rivera said.

Rivera had held out hope that Smith could return Sunday. After missing last week’s game with a strained right calf, Smith practiced in full on Friday but felt sore Saturday.

“We were kind of hoping [Smith would play], and it didn’t work out,” Rivera said.

All along, Rivera was clear that Haskins would start if Smith couldn’t play. The other options were undrafted rookie free agent Steven Montez, who has never taken a snap in a game, and Heinicke, who had not played in an NFL game since 2018 and spent last winter in the XFL.

But Heinicke knew Washington’s offense, having played for coordinator Scott Turner with both Carolina and Minnesota. Rivera eventually turned to Heinicke in the fourth quarter of Sunday’s game, and he responded by completing 12 of 19 passes for 137 yards and a touchdown.

Rivera said he did not make the move earlier because of how Haskins finished vs. Seattle last week, when he completed 23 of 31 passes for 197 yards in the second half of a 20-15 loss.

“I wanted to see him come out in the third quarter and see if he could pick up the energy he had last week,” Rivera said.

“We just weren’t clicking,” Haskins said. “I wish I could go back and change some things, but it’s over with now.”

When asked what he wanted to see from Haskins, Rivera offered one word: “Improvement.”

Sunday wasn’t the time to fully assess Haskins’ future. But his season has not gone the way he or Rivera had hoped. Multiple sources have said the 2019 first-round draft pick needs to do a much better preparing as an NFL quarterback and that they want him to mature. Haskins has two years left on his rookie contract and wasn’t in the mood to look beyond this season.

“That’s not a question for me to answer,” he said. “I’m here. I’m looking forward to next week.”