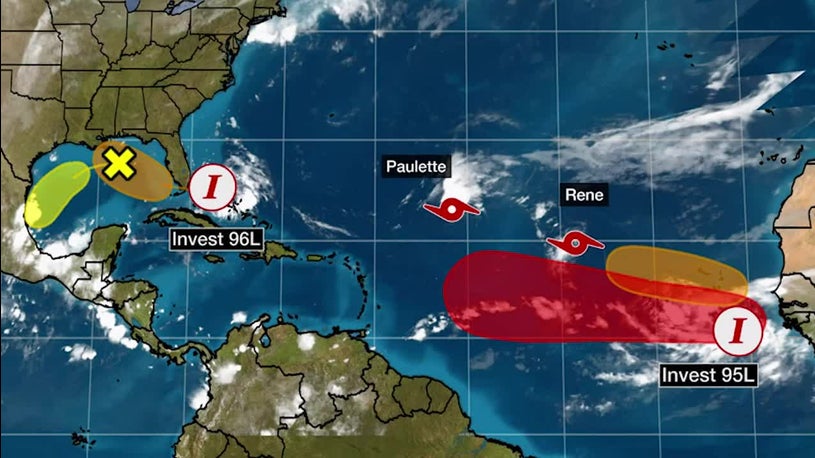 Four tropical storms, at least one of which might be a hurricane, could be present at the same time in the Atlantic Basin in the coming days – something that sounds incredible, but has happened a number of times before.

We’re already halfway there, with Paulette and Rene in the central Atlantic Ocean.

The National Hurricane Center is also monitoring a number of other disturbances that could spawn a tropical depression or tropical storm in the coming days.

Since satellites began to fully cover the Atlantic Basin in 1966, the record number of simultaneous Atlantic Basin named storms is four, according to Dr. Phil Klotzbach, a tropical scientist at Colorado State University.

That’s happened six times, including as recently as two years ago.

As Hurricane Florence headed toward the Carolinas in mid-September 2018, Hurricane Helene and tropical storms Isaac and Joyce were spinning in the central Atlantic Ocean.

Ten years before that, the inland remnant of what was once Hurricane Gustav, as well as hurricanes Hanna and Ike and Tropical Storm Josephine, were lined up from Sept. 2-4, 2008.

It also happened during the 2004 hurricane season, infamous for the four Florida hurricane strikes.

From Sept. 22 to 24, Tropical Storm Ivan made its second landfall in southwestern Louisiana after its weird remnant loop over the Southeast following its most devastating landfall.

At the same time, Hurricane Jeanne was completing its counterclockwise loop east of the Bahamas, Karl was a formidable central Atlantic hurricane and Tropical Storm Lisa was between Africa and the Lesser Antilles.

Four Hurricanes at Once

The only other time four named storms happened at once, according to Klotzbach, was also the only documented time four hurricanes were in progress at once in the Atlantic Basin.

How This Can Happen

Each of these “four-at-once” events occurred sometime between late August and late September – the peak time of the hurricane season.

This is when ocean water is warmest, the atmosphere’s ability to generate thunderstorms is at its peak and shearing winds hostile for tropical storms typically reach a seasonal low.

Furthermore, disturbances known as tropical waves, the seeds for many tropical storms and hurricanes, are numerous in late August and September, marching off Africa westward into the Atlantic Ocean. A tropical wave usually moves off West Africa every three to four days.

Most importantly, all these favorable factors occur over a large area of the Atlantic Basin in the heart of the hurricane season. This means there can be multiple named storms and hurricanes spread through the basin at one time.

For instance, a landfalling storm in the Gulf of Mexico could happen as another storm impacts the Caribbean, a third is in the central Atlantic Ocean and a fourth is just getting started a few hundred miles off the West African coast.

This four-storms-at-once scenario did not happen during the record-setting 2005 Atlantic hurricane season, during which there were 28 named storms and 15 hurricanes.