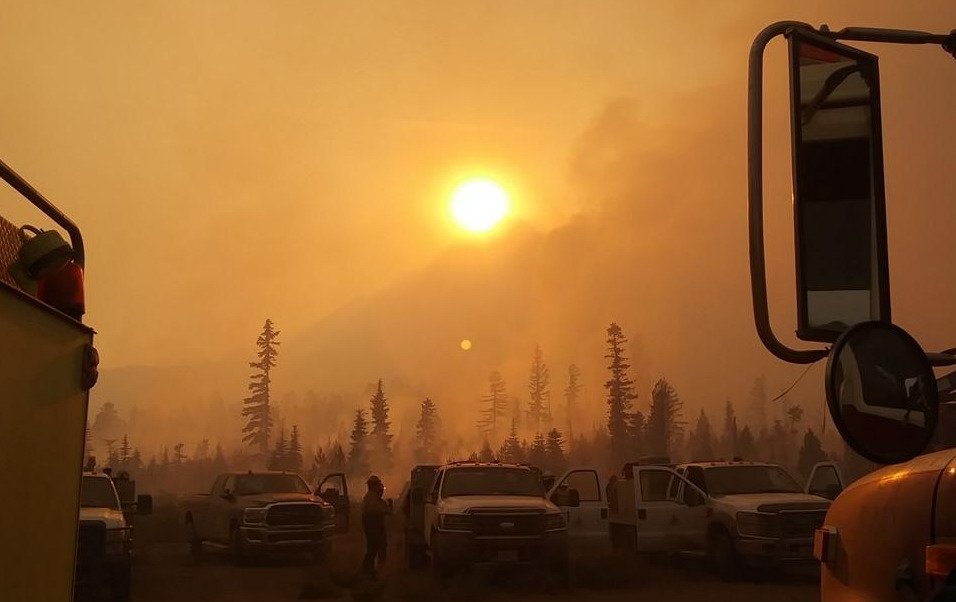 Weather and Fire Behavior: Temperatures will be warmer with slightly lower humidity levels than yesterday. Easterly winds will persist through most of the day, changing to southeast in the late afternoon. East winds will decrease; however, drought conditions, high temperatures and low relative humidity will contribute to continued active fire behavior.

Current Situation: Extreme drought conditions combined with strong easterly winds, due to a cold front, pushed the fire spread west over the crest of the Cascades and north of Mt. Jefferson. Long range spotting contributed to more than 12 miles of fire spread that included the areas around Breitenbush and Detroit Lake. The fire also crossed Highway 22 in multiple places. Fire personnel coordinated with local emergency services on evacuations, providing escort for residents and campers.

Crews on the Warms Springs Reservation portion of the fire took advantage of the easterly winds to prepare and strengthen indirect containment lines. On the eastern and southern flanks of the fire, crews worked to clear roads in anticipation of a return to westerly prevailing winds to prevent the fire from moving toward Warm Springs and the Metolius Basin.

Today’s Activities: Safety of firefighters and the public remains our highest priority.  Firefighters will continue to assist with any necessary evacuations as needed. Crews will assess and provide protection to structures at risk in the Detroit area. On the west side of the crest of the cascades, fire crews will scout from the north and south to determine locations for containment lines. To the south fire crews will be looking for access in the area around Idanha and Detroit area. On the Warm Springs Reservation firefighters will continue preparing roads to be used as containment lines on the northeast and southern side of the Lionshead Fire. Air resources will be available as needed to help with containment efforts.

Closures: For public and firefighter safety, roads and trails on the southwest portion of the Warm Springs Reservation near the fires are closed to the public. Forest closures are in place for Deschutes, Mt. Hood and Willamette National Forests.

A Temporary Flight Restriction is in place over the P-515 and Lionshead Fires. Wildfires are a No Drone Zone.

Keizer, Ore. – Wildland firefighters, working on the Beachie Creek Fire, were forced to evacuate their encampment in Gates, Ore. after several electrical lines and transformers were destroyed in an extreme wind event which began on Monday afternoon. Pacific Team Northwest 13 is currently headquartered at Chemeketa Community College in Salem.

Originally listed at 469 acres, the fire has grown overnight to over 131,000 acres driven by high winds and extremely dry fuels. Originally named the Beachie Creek fire, it has been renamed the Santiam Fire, acknowledging that the Beachie Creek Fire no longer was the main cause of rapid fire growth and was instead fed by a series of small fires largely caused by downed power lines and other ignition sources throughout the area.

WEATHER: A Red Flag Warning for strong winds will be in effect today through 8:00 p.m. Wednesday. Wind gusts are likely to reach between 30-40 mph with 50-60 mph gusts likely on exposed ridges. The wind may ease Tuesday night and into Wednesday. Fire conditions are expected to improve later in the week.

SAFETY: Members of the public are encourage to heed local evacuation orders issued by the county sheriff’s office and emergency notification systems. Any public trying to access the area are asked to stay away to keep roads clear for those evacuating and for emergency vehicles. The roads are extremely hazardous due to falling debris, smoke and heavy traffic. Members of the public in the immediate area are asked to keep the Ready, Set, Go levels of evacuation in mind. READY your belongings; SET your things at the door or prepack them in your car; GO Leave immediately.

SMOKE: Smoke is expected to remain heavy throughout the area for the next several days. Individuals with respiratory issues may find themselves affected by the intense smoke. Smoke levels are fluctuating between unhealthy for sensitive groups (orange) and hazardous (maroon) in these areas. Areas closest to fires – near Detroit, Florence, Chiloquin and Eugene

– are having the worst smoke impacts. Smoke levels can change rapidly depending on weather. Check current conditions on DEQ’s Air Quality Index or by downloading the free OregonAIR app on your smartphone.

CLOSURES: Willamette National Forest roads, trails, and lands around the fire area are closed. View the official order (Order 06-18-04-20-13) or go to InciWeb (link below) for a list and map of the closed roads, trails, and recreation sites.

CHILOQUIN, OR – The Two Four Two Fire continued to burn on the Chiloquin Ranger District and the surrounding area.

An Oregon Department of Forestry (ODF) Type 2 Incident Management Team assumed command of the incident this morning.  The incident is a unified command with ODF and the U.S. Forest Service.

The fire is estimated to be approximately 10,000 acres with 5 percent containment.  The cause is under investigation.

The Two Four Two Fire is burning in dried grass, brush and timber with extreme fire behavior.  Growth yesterday was wind-driven, with movement in all directions.  Multiple structures are threatened.  Fire managers are still assessing structures that may have been lost.

There is a public meeting scheduled tonight at 7 p.m. through Facebook Live at www.facebook.com/SCOFMPFIREINFO.  The page is public and the meeting can be viewed even if you don’t have a Facebook account.  Questions can be submitted in advance of the event through the SCOFMP Facebook account or by contacting Fire Information through the provided phone number and email.

The Klamath County Sheriff’s Office asks area residents to please use texting and social media to update family members on their status.  Communication lines are being bogged down due to increased cellphone traffic, resulting in challenges for calls to be connected.

U.S. Highway 97 is now open, one-lane with a pilot car between Oregon State Highway 62 south of Chiloquin north to the intersection with Forest Road 9732 at Oux Kanee Overlook.

All other road closures and evacuation orders remain in place.

Level 2 Evacuation – south of Maidu Road, west of Highway 62, including Oregon Shores 2.  Residents should be prepared if there is a need for immediate evacuation.

The Red Cross has established an evacuation center at Kla-Mo-Ya south of Chiloquin.  Evacuees or those with questions are advised to not call 911 unless it is an emergency, but instead go to Kla-Mo-Ya in person.  The Klamath County Fairgrounds are also available for evacuees with trailers or animals.  RV hook-ups and animal holding facilities are available.

There are currently 19 engines, four handcrews, eight dozers, four water-tenders and multiple air resources including two lead planes, 11 single-engine airtankers, and three helicopters assigned to the fire.  More resources are being ordered.  Because of heat and smoke, the use of air resources has been limited.

When air resources are available, Klamath Lake is being used to scoop water.  Boaters are advised to be aware of their surroundings and avoid areas where aircraft is operating over the water.  Williamson River and Spring Creek are also being used for dip sites.

Prineville, Ore. – Effective immediately, forest officials have lifted the area closure that was put in place for the Frog Fire burning in the Maury Mountains on the Ochoco National Forest. The Frog Fire is now 100% contained at 4,020 acres.

The fire started when a lightning storm passed through Central Oregon on August 16 and burned in the steep and rugged terrain of the Maury Mountains until it was fully contained on September 1, 2020.

There may be some hazards in the fire area, including hot spots or trees that may present overhead hazards. Please use caution if you are recreating in the area.

Prineville, Ore. – Effective immediately, forest officials have lifted the area closure that was put in place for the Frog Fire burning in the Maury Mountains on the Ochoco National Forest. The Frog Fire is now 100% contained at 4,020 acres.

The fire started when a lightning storm passed through Central Oregon on August 16 and burned in the steep and rugged terrain of the Maury Mountains until it was fully contained on Sept. 1.

There may still be some hazards in the fire area, including hot spots or trees that may present overhead hazards. Please use caution if you are recreating in the area.

To keep up with fires in Central Oregon, please visit: www.centraloregonfire.org