This is the moment a white woman pulled a handgun on black activists in South Africa as they protested a hair advert that has been deemed racist.

The 52-year-old woman got into a confrontation with far-left activists in a shopping mall in Port Elizabeth on Tuesday, amid nationwide demonstrations against the Clicks chain of pharmacies which broadcast the advert.

One of the demonstrators can be heard shouting ‘go back to Europe’ at the woman and her companion, as they are escorted out of the mall by five security guards.

At one point, a demonstrator pushes the woman who then pulls a handgun out of her pink jacket and turns around to point it at them. 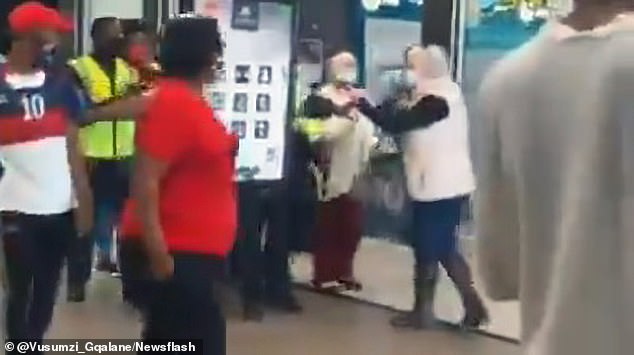 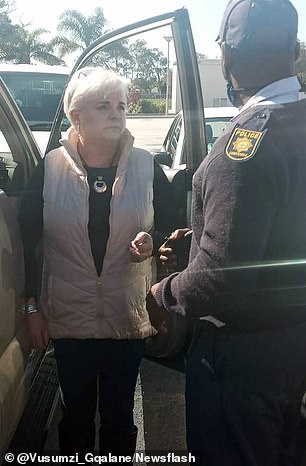 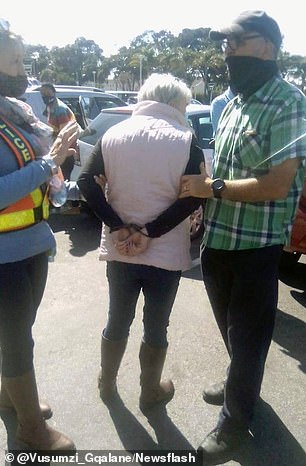 Police said three people had to be escorted out of the shopping mall in Port Elizabeth after the argument, with at least two of them placed in handcuffs – though nobody was arrested

A man and a woman can then be heard shouting ‘shoot, shoot’ as the women are hurried outside by security.

Police told Times Live that three people were removed from the Walmer Park Shopping Centre after an altercation, though did not reveal details.

Officers said the same three people also had to be removed from the car park after a further argument erupted outside.

Pictures show the woman who pulled the gun an a black activist being handcuffed in the car park, though officers say nobody was arrested.

Protesters from the far-left Economic Freedom Fighters political party have been targeting branches of Clicks at malls across South Africa since the weekend, after it shared an advert online that was deemed racist. 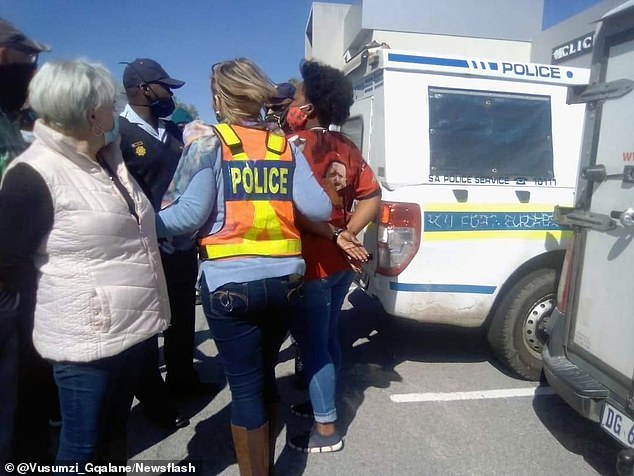 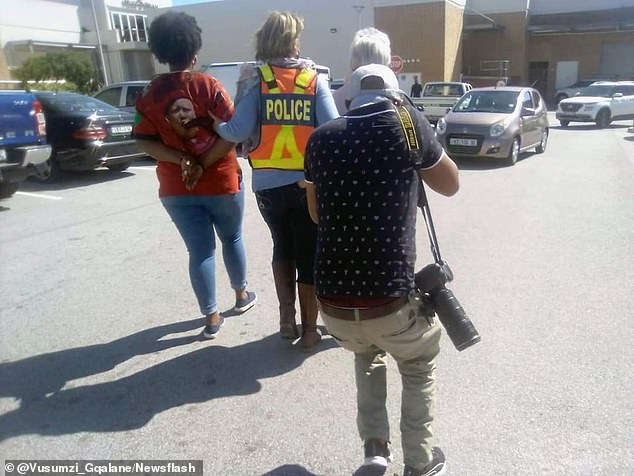 The far-left EFF party has called for all stores of pharmacy chain Clicks to be shut down over an advert that branded black women’s hair ‘dull, frizzy and damaged’

Clicks quickly apologised and pulled the advert from its site, before agreeing to pull all TRESemme hair products – the company which produced the advert – from the shelves and replace them with ‘natural’ alternatives.

But the EFF accused the company of ‘publicly dehumanising black people’ and called for its stores to be shut down due to its ‘unrepentant and perverse racism.’

The organisation has since sent demonstrators to protest outside stores across the country, in an attempt to keep them closed.

Clicks said that EFF protests have taken place at 37 stores in KwaZulu-Natal, Gauteng and the Western Cape.

Seven stores have also been targeted by vandals and at least one, on the outskirts of Johannesburg, has been burned – though the EFF has denied responsibility.

The high court in Johannesburg has issued an order preventing the EFF from intimidating and threatening Clicks’ employees or any of its operations.

The order also stopped the party from inciting violence against the company’s everyday commercial operations.