Donald Fear, 57, scooped the £1 million prize during a sensational run on Friday night’s show of Who Wants To Be A Millionaire?

And fans took to Twitter to joke about how they wished he had used the Phone A Friend lifeline to call his brother Davyth and inform him he was about to beat his record on the show.

The history teacher’s elder brother had won £500,000 on Who Wants to be a Millionaire last year, and Donald was the first person in 14 years to enter the the £1 million club. 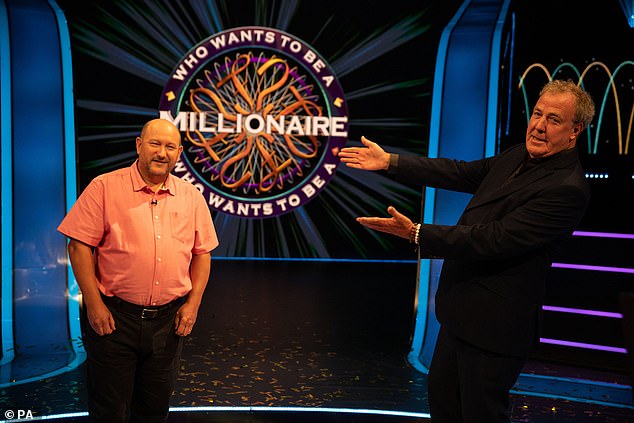 Rub it in: Who Wants To Be A Millionaire? fans joked winner Donald Fear should have used his Phone A Friend lifeline to call his brother Davyth to GLOAT he beat him to the jackpot on Friday

Joking about the fact Donald had several lifelines remaining and could have used it during the final hurdle, one viewer wrote: ‘Sorely disappointed Donald Fear didn’t take the [mic] drop option and ring his brother to let him know he was about to beat him and win the jackpot! He had two phone-a-friends left.’

One said: ‘Missed a trick not phoning his brother to rub it in a bit.’

Adding to the general sentiment, one viewer claimed: ‘I think if I’d been Donald Fear and been so confident of the million pound answer on #WhoWantsToBeAMillionaire, I would have used Phone a Friend to ring my brother first just to tell him I’d beat him.’ 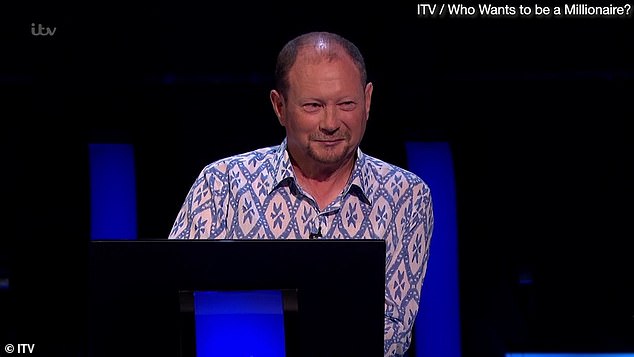 Almost had it: The history teacher’s elder brother had won £500,000 on Who Wants to be a Millionaire last year

While another shared a clip of John Carpenter calling his dad and telling him he didn’t need him to help before winning the million on the US edition of the show.

Alongside the video, the fan added: ‘Fair play to #DonaldFear and all that, but I would have definitely rang my brother and mug him right off and then just have a casual chat with Jezza, take a leaf from this guy.’

One person added: ‘He should have rang his brother and said “don’t need you but thought I would just say hi” huge congratulations to the new Alexa that is Mr Fear (sic).’ 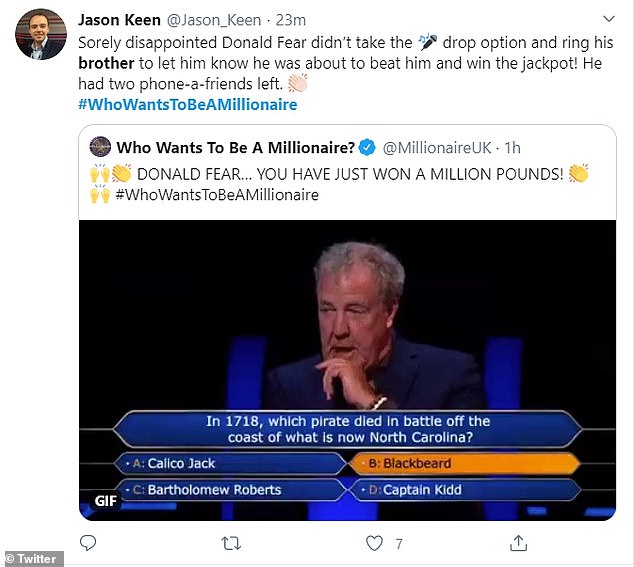 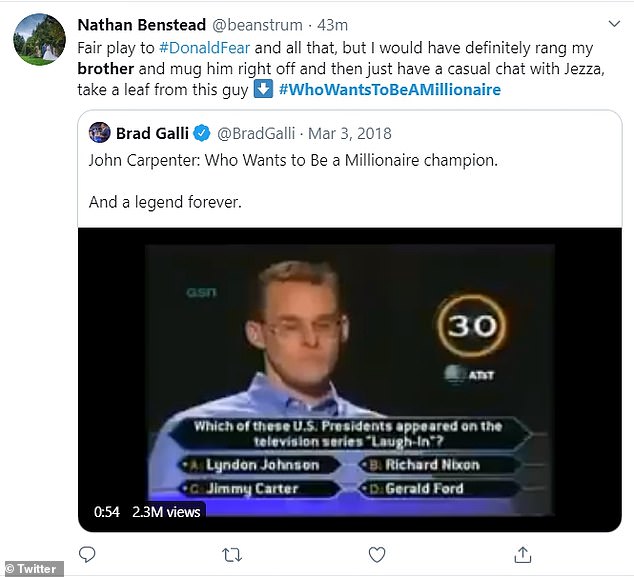 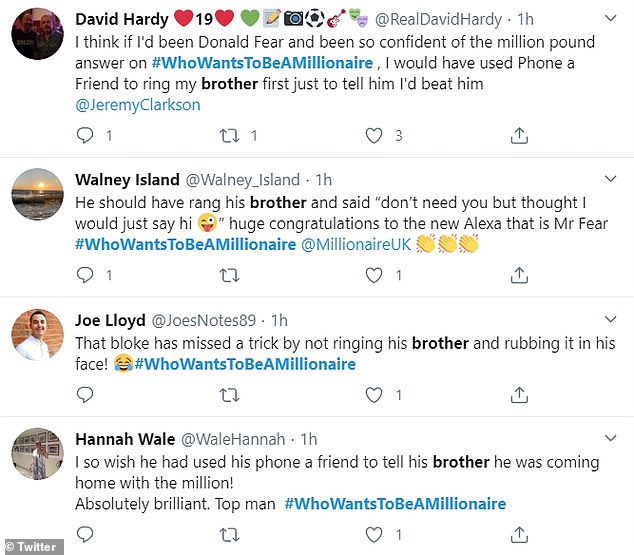 ‘Missed a trick’: Joking about the fact Donald had several lifelines remaining and could have used it during the final hurdle, and used it to show off

The contestant even admitted he was able to answer the £1 million question – ‘In 1718, which pirate died in battle off the coast of what is now North Carolina?’ – before he’d seen it properly.

It was at this point in the show – the final question – on September 1 last year that his retired geography teacher brother stumbled and chose to walk off with his half million.

But as a history buff, Donald, from Shropshire, knew the answer to his question instantly.

‘The first thing I spotted was that there was a date in there… then a microsecond later I saw that it was 1718,’ he said. ‘Then synapses went, ‘That’s got to be Blackbeard’. That was the only thing it could be. I’m a dates man.’ 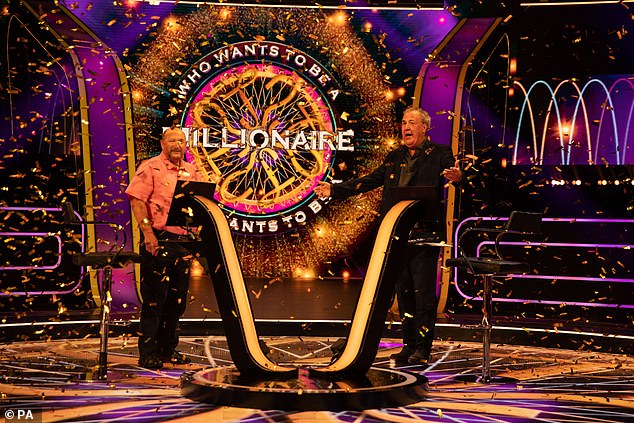 Congrats! Donald was the first person in 14 years to enter the the £1 million club, and he even admitted he was able to answer the £1 million question before he’d seen it properly

The day after his win in the recorded show, Donald handed in his notice as head of history at Haberdashers’ Adams grammar school in Shropshire, which the former Labour leader attended.

He will see out the school term, then begin his retirement two years earlier than planned.

He intends to give 70 per cent of his winnings away to family members and to charity and leave himself with just enough for a ‘comfortable retirement’.

The father-of-four and grandfather hesitated on only two questions, using his 50/50 lifeline for one of them. 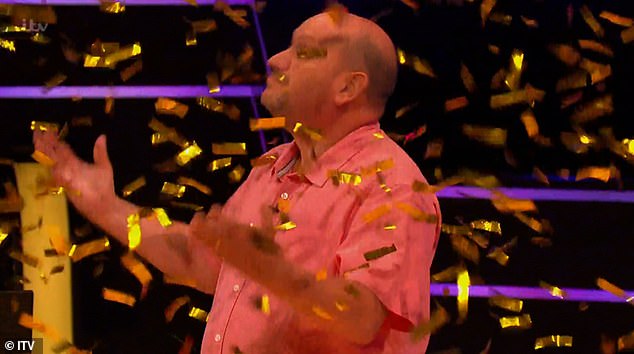 Winner! The day after his win in the pre-recorded show, Donald handed in his notice as head of history at Haberdashers’ Adams grammar school in Shropshire

‘I was so fortunate,’ he said. ‘Of the 15 questions, I probably knew 13 immediately before the options appeared.’ He added: ‘A quiz is very easy if you know the answers and I did know the answers.’

The last £1million winner on the show was retired civil servant Ingram Wilcox in 2006.

When Donald was speaking with host Jeremy Clarkson after reaching the £1,000 milestone, he spoke of his brother Davyth’s time on the programme. 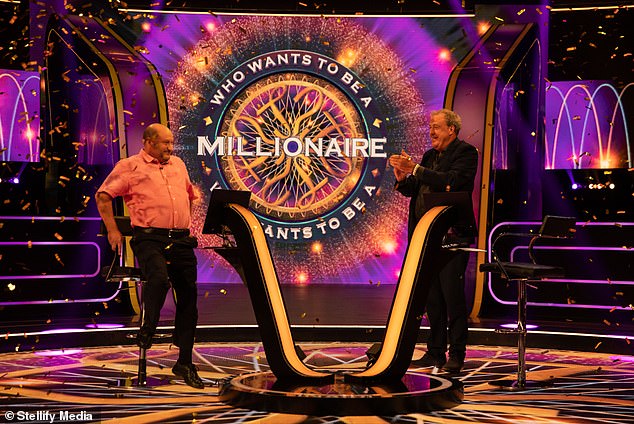 Amazing: He described himself as ‘lucky’ and said he wouldn’t have known a question about This Morning which came up in the previous episode

‘When I applied to the show I didn’t know how much he won,’ Mr Fear said.

‘I said my aim is to get one step further than my brother has. When I found out where he got to I thought ah, maybe not.’

Speaking of when they would play from home, he added: ‘He has three years on me, I would say Dave would win 90 per cent of the time.’

During his 20 minutes on the programme – thought to be a possible new record -Jeremy said it was like ‘sitting next to the internet in a pink shirt’. 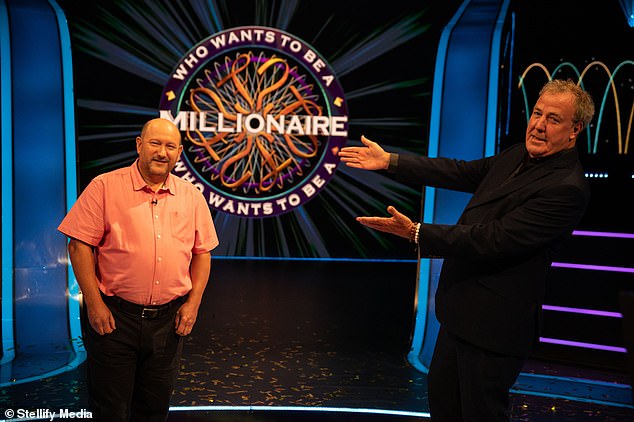 Well done sir! Donald, who has been a teacher for more than three decades, said he had been inundated with support from his students who heard he was on the show, but hasn’t let on about his big win

Just before answering his final question, he said: ‘I taught piracy one year at a special unit.

‘I do remember Blackbeard died in 1718 off the coast of North Carolina. Blackbeard, final answer.’

The contestant, who still had three lifelines left, responded: ‘That was absolutely incredible, how easy was that!’

When asked how he knew the answer, Donald said: ‘Well I taught it!’

Jeremy said: ‘You’ve beaten your brother – how does that feel?’

But he sweetly retorted: ‘He’ll be very pleased for me, that’s the sort of person he is.’ 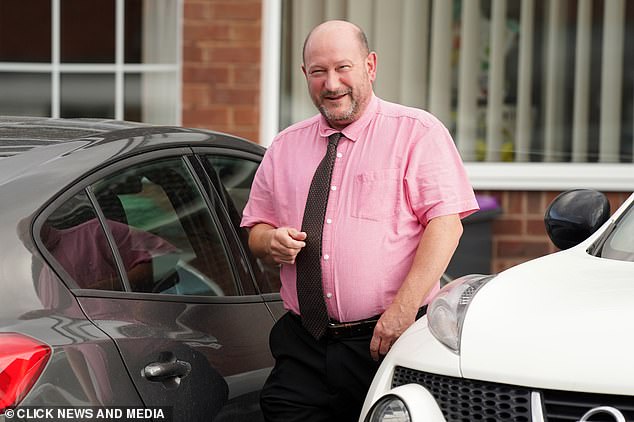 Excited: The contestant, who still had three lifelines left, said upon winning: ‘That was absolutely incredible, how easy was that!’