Workers gathered at Windsor Castle to quietly protest plans to axe up to half of the Queen’s household staff in cuts amid the coronavirus pandemic.

Royal Collection Trust staff staged a silent protest outside Windsor Castle on Tuesday over new plans which could see 200 compulsory redundancies handed out and others facing pension cuts.

The workers, who manage the public opening of Her Majesty’s residences, demanded ‘loyalty’ from their employers and held a sign saying ‘King Henry cut off heads… now they want to axe our jobs and cut our pensions’.

The job cuts come after Covid-19 created an £18 million black hole in Her Majesty’s finances.

The Royal Collection Trust, which is one of the five departments of the Royal Household, employs 600 people across the country including at Buckingham Palace and in Windsor, Berkshire.

The ‘loyal’ workers have duties including conserving the historic Royal Collection, one of the world’s greatest private art collections. 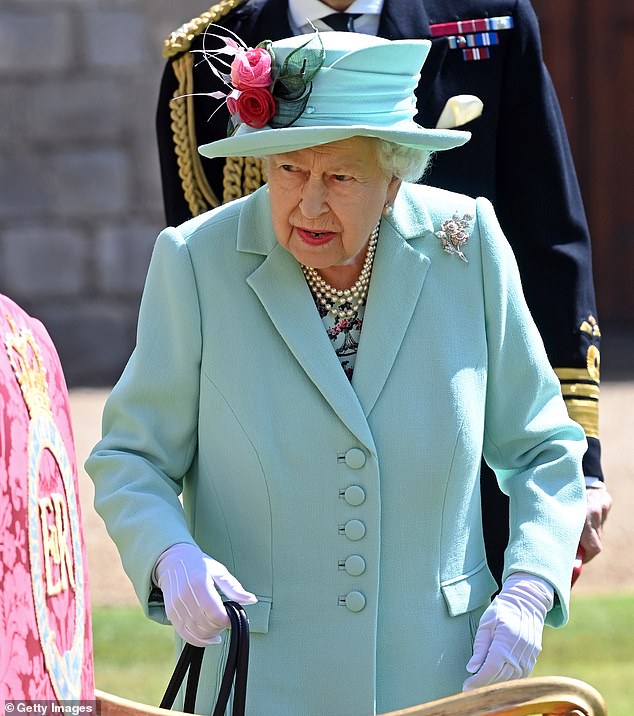 The Public and Commercial Services Union (PCS), which represents the workers, said 104 staff showed an interest in voluntary redundancies, with 92 taking them. 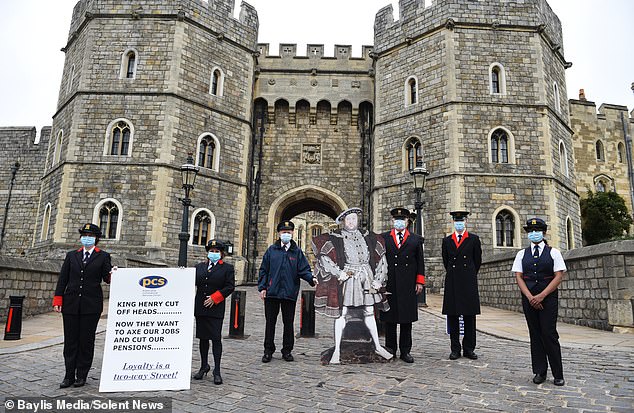 Royal staff held a silent protest outside Windsor Castle on Tuesday over the new plans, which could see 200 compulsory redundancies handed out

The Public and Commercial Services Union (PCS), which represents the workers, said 104 staff showed an interest in voluntary redundancies, with 92 taking them.

The union added that there could still be another 200 compulsory redundancies for royal household staff.

But workers who are keeping their jobs are set to face a seven per cent cut to their non-contributory pensions.

Mark Page, industrial officer at PCS, said: ‘Loyal staff members should not be facing threats like this.

‘Even acknowledging the pandemic, vulnerable staff believe the Royal Household has enough assets to ride out the financial storm having had record numbers of ticket sales and retail sales in recent years.

‘Profits directly attributed to the very department the Royal Household is now penalising.’

The Royal Collection Trust (RCT) is in charge of royal artwork and public tours at Her Majesty’s residences. 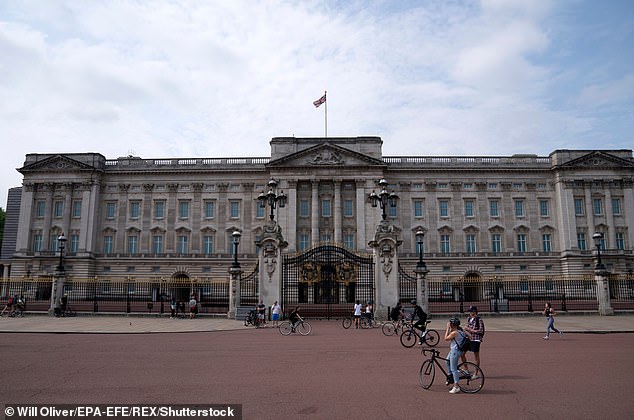 The Public and Commercial Services Union (PCS), which represents the royal staff, said workers who are keeping their jobs could face a 7% cut to non-contributory pensions

A RCT spokesman said: ‘Due to the impact of the Covid-19 pandemic on the finances of Royal Collection Trust, we have had to take a number of steps to reduce staff-related costs.

‘As well as implementing a pay freeze and offering a voluntary severance programme to employees, we have just completed a period of consultation on a proposed reduction in pension contributions and will be discussing our response with the unions shortly.’

WHAT IS THE ROYAL COLLECTION TRUST?

It is responsible for the care and presentation of the collection, which is one of the most important private art collections in the world.

Spread among 13 occupied and historic royal residences in the United Kingdom, the collection is owned by Elizabeth II and overseen by the Royal Collection Trust.

It also manages the public opening of the official residences of Her Majesty The Queen.

Their website states: ‘Through our work, from exhibitions and learning programmes to publications and retail products, we aim to ensure that the Royal Collection and Palaces are valued and enjoyed by everyone.’

A PCS spokesman said: ‘One hundred and four people expressed an interest in the voluntary redundancy scheme, 92 actually took it up.

‘We are expecting an announcement in the next few days of a compulsory scheme.

‘To make the savings that the management claim they need to make, we believe that they will need to make 200 compulsorily redundant.’

The PCS said if staff had been furloughed it could have prevented it.

The Queen, 94, and Prince Philip, 99, have been cared for at Windsor since lockdown started in mid-March by a devoted team of staff who provide a protective shield – dubbed ‘HMS Bubble’ – around them.

The staff are split into two groups of 12 who work away from their families on a ‘three weeks on, three weeks off’ basis, the Sun reported.

Royal staff, including chefs, cleaners and officials, spend two weeks at home and a third week in quarantine during their time away from Windsor, it was said.

Under strict measures to protect the monarch, each employee is then tested for Covid-19 and has their temperature taken before they can begin another three-week rotation.

It was announced yesterday that the Queen will return to work at Buckingham Palace in October in the hope of resuming ‘selected audiences and engagements in London’ for the first time since March.

The monarch and Prince Philip typically remain at Balmoral, in Aberdeenshire, until next month but are now set to depart earlier, Buckingham Palace announced yesterday.

She and the Duke of Edinburgh will depart from Balmoral next week and travel to Norfolk together to ‘spend time privately’ at the Sandringham Estate, where Philip spends much of his retirement at Wood Farm.

The Queen will then return to Windsor in October, from where she will travel to Buckingham Palace for working visits.