A woman was filmed unleashing a racist diatribe at three black women enjoying a morning run along a Los Angeles beach on Sunday, before calling 911 to falsely claim they’d attacked her.

The three friends, identified only by their first names as Brittany, Jessyka and Raquel, said they had been on their weekly jog along the Dockweiler State Beach when a woman – since dubbed a Karen online – began spewing racial slurs at them.

Among the slew of derogatory terms, the three friends say the woman called them the n-word on more than one occasion. The women also claim she said ‘Black lives don’t matter, your life doesn’t matter, you need to go back to Africa’.

They then decided to start filming the woman, in which she is heard saying to Brittany in the clip: ‘You guys are so violent. You Africans are so f***ing violent.’ 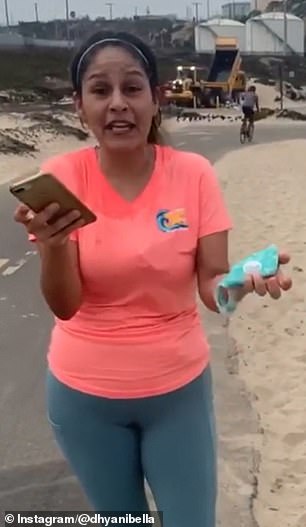 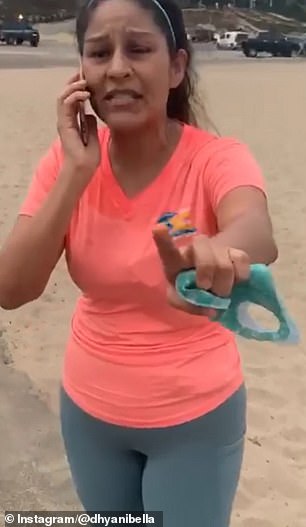 Three black women enjoying a morning run along a Los Angeles beach were subject to a vile racist rant from a stranger who they said came out of nowhere. 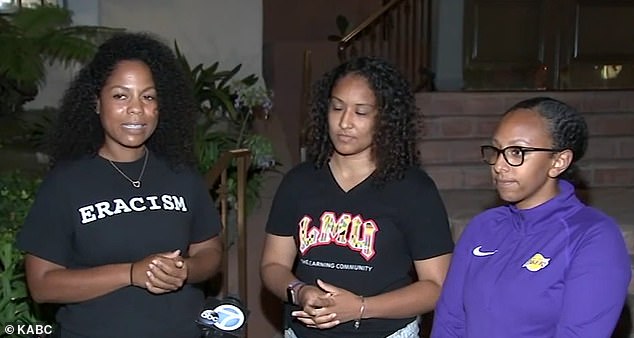 The three friends, identified only by their first names as Brittany, Jessyka and Raquel, said they had been on their weekly jog along the Dockweiler State Beach when a woman, since dubbed a Karen online, began spewing racial slurs at them

The woman seen in the video informs the group she’s calling the police, claiming the Brittany and her friends had accosted her.

‘I’m calling the police. This woman just hit me. Guys, this woman just accosted me,’ the woman in the video is heard saying aloud to no one in particular, before attempting to attract the attention of passersby when he false hysteria falls on deaf ears.

‘I can’t believe you, you guys are just so violent,’ she continues robotically, as she looks down typing on her phone.

The group say they originally encountered the woman at the beginning of their run. It was then that she allegedly called them the n-word, and they decided to capture her on film on their way back.

‘I thought, “I have to expose this”, so I actually caught up to her and was like, “Tell me again what you said.” And that’s when I started recording and she just continued,’ Brittany recounted for ABC7.

Raquel said the friends were caught off guard when they heard racial slurs hurled at them. All three of the women said they were upset and afraid.

When Brittany questions the woman why he had previously used n-word during their prior encounter, the woman responds, ‘You’re an African?’

‘So an African is a n*****?,’ Brittany is heard responding, the emotion frank in her voice.

When the woman claims that Brittany is attempting to put ‘words in my mouth,’ Brittany says once again that she had previously called her the n-word. 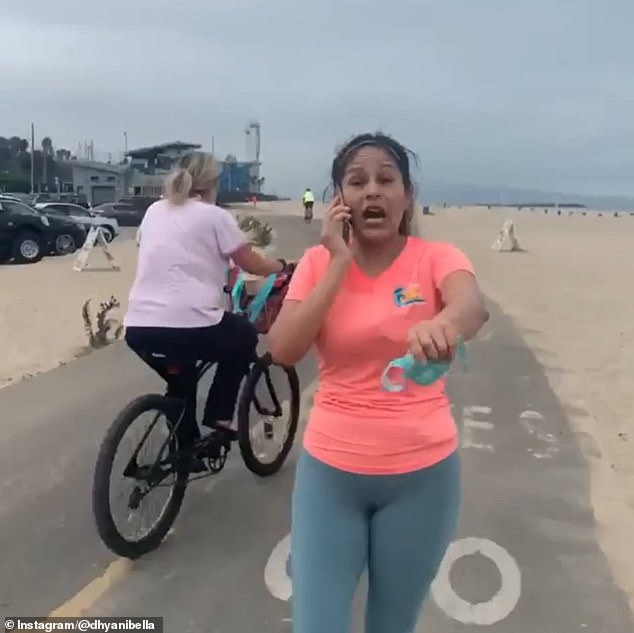 The woman seen in the video informs the group she’s calling the police, claiming the Brittany and her friends had accosted her 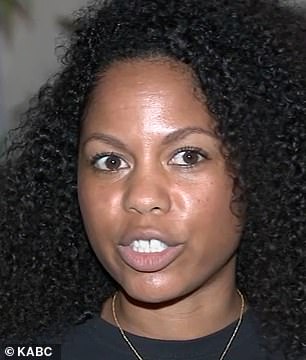 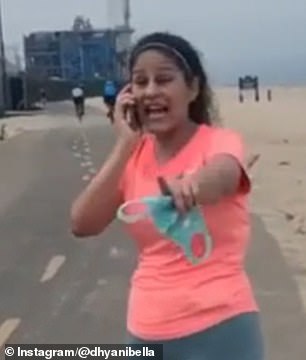 When Brittany questions the woman why he had previously used n-word during their prior encounter, the woman responds, ‘You’re an African?’

The woman, without appearing to dial, then holds the phone up to her ear and says, ‘Hello, police? A woman just accosted me, this woman just violently attacked me.’

Brittany responds by calling out, ‘This woman is a Karen. She called me the n-word.’

‘You’re not wearing a mask,’ Brittany informs the woman, mustering a small laugh.

Brittany keeps walking towards the woman as she walks backwards down the footpath, continuing to face the camera.

‘She’s not keeping six-feet away from me,’ the woman continues to protest. ‘And she f**ing attacked me from behind,’ she adds, turning to face the other way.

The woman then flags down a passing cyclist, claiming that Brittany had attempted to ‘attack her from behind.’

Brittany interjects, telling the bystander that she ‘called me the n-word, called me a black African, told me to go back to Africa. She told me she would get me a flight…the cheapest flight back to Africa, because you’re Mexican and you own this place, right?’

The woman interjects: ‘You are a black African, now stay the f*** away from me.’

She then tells the woman in the footage she’s ignorant. The woman protests that she isn’t ignorant, rather that she’s ‘cognizant as f***.’

The woman continues walking backwards, facing the camera, telling Brittany to stay away from her, before adding, ‘you’re the virus.’

Brittany informs a bystander that she is filming the woman so she can later file a police report and make an example of the woman. 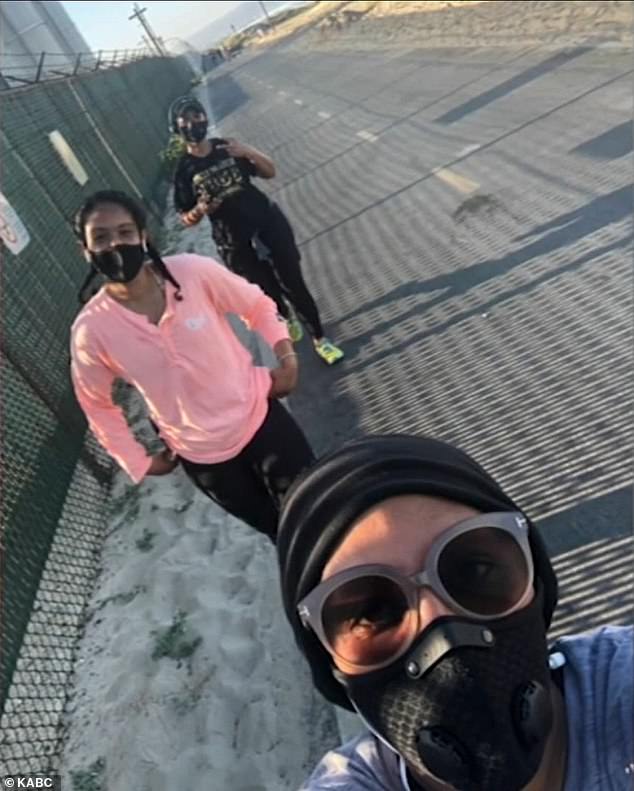 The three women regular jog together in the area. They all say they have never experienced anything like Sunday’s encounter with the currently unidentified woman 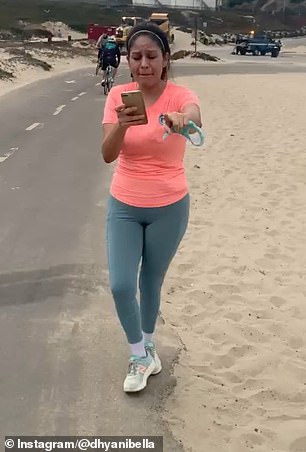 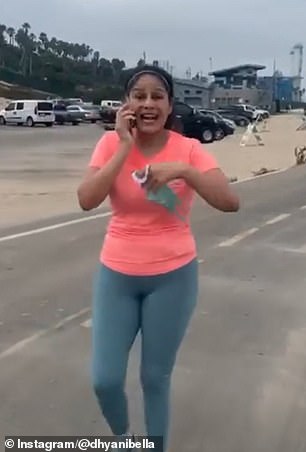 The woman depicted in the video has been tentatively identified online. The woman, and her listed employer, have not yet responded to a DailyMail.com request for comment.

In the meantime, the woman is heard rambling into her phone, insisting: ‘I need a paramedic. I need an ambulance. I… my environment has been harmed by this African black person.

‘Yes, I’ve been harmed by the environment this African has created,’ she continues. ‘This African,’ she screams, ‘Black Lives! Black Lies!’

The woman then begins speaking into her phone again, repeating ‘My emergency is that I was just attacked by an African black person and she just attacked me from behind.’

The bystander intervenes, telling the woman she had not been attacked. ‘You are not good,’ the bystander tells her.

Police say the woman did call to report what they said was a false claim of being assaulted. It’s unclear whether she was actually on the phone when the video was being recorded.

‘A direct attack in our face has never happened before and this was a good reminder that this does happen and it is right there in our faces,’ Jessyka told ABC7.

The three women have since filed a hate incident report with the Los Angeles Police Department.

‘What we’re hoping to leave people with is that encouragement to confront the hate and racism that they see in their inner circles. It’s unfortunate that people still feel this way but it can’t be on people of color alone to fix,’ Raquel said.

The woman depicted in the video has been tentatively identified online. The woman, and her listed employer, have not yet responded to a DailyMail.com request for comment.