An 18-year-old who received support from her family when she announced that she’s bisexual, has shared the shock of having her parents urge her to end her relationship with her girlfriend becauuse she’s blind.

Posting on Reddit, the woman believed to be from the US, explained her parents have been supportive of her sexuality and recently had the opportunity to meet her 20-year old girlfriend who has visual impairment.

She said her girlfriend was polite and made good conversation, however since their initial meeting her parents have warned the relationship could cause future limitations and have become cold towards her.

‘I have no clue what to do about this because they’re just being discriminatory and unpleasant about something that doesn’t affect them because they think she’s gonna limit me somehow and I seriously hate it,’ she explained.

A flood of responses to the post urged the woman to educate her parents about how anyone can thrive regardless of disability, while others suggested they may be using blindness to disguise their homophobia. 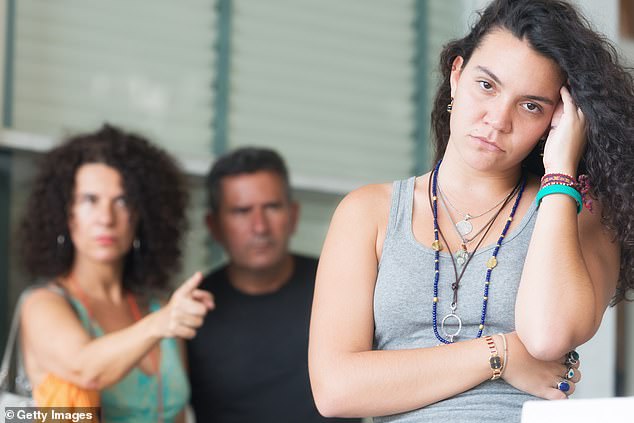 An American woman sparked a discussion about dating someone with a disability, as she explained how her parents have reacted towards her blind girlfriend  (file image)

In an emotional post, the woman wrote that her parents were ‘nothing but supportive and understanding’ when she came out as bisexual, so she know it’s not ‘part of the issue’.

She said she’s been dating her girlfriend, 20, who is blind, for a few months and she’s visited the family home for dinner on several occasions.

‘She’s always really polite and they have good conversations,’ the teenager explained. ‘She’s the kind of person who knows enough about most things to be able to participate in whatever topic, and in general there’s been a positive vibe when they’re together.’

However, she explained that her parents ‘have a real problem with her being a burden on me’, and asked if she felt the relationship could be long term.

‘They sat me down again later that week and talked about how I need to always make sure I’m thinking things through and considering my best interests etc and I didn’t feel comfortable so I didn’t prolong it.’

Revealing her parents have changed their behavior towards her girlfriend, the woman continued: ‘After she’d been over a few more times and once again, there was no obvious issues in them getting along or any animosity, mom asked to talk to me again and discussed how it’s not “in my best interests” to be with someone who will “limit my future options”.

‘I admit, when we talked I reacted badly and got angry because she was saying it in a really condescending tone and acting like my girlfriend helpless or something.

‘She’s really independent and capable, and I’ve explained that before) and since then they haven’t had a conversation for the past few weeks,. But they don’t like whenever I bring her up and they’ve been a lot more cold and almost rude to her at points for no particular reason. 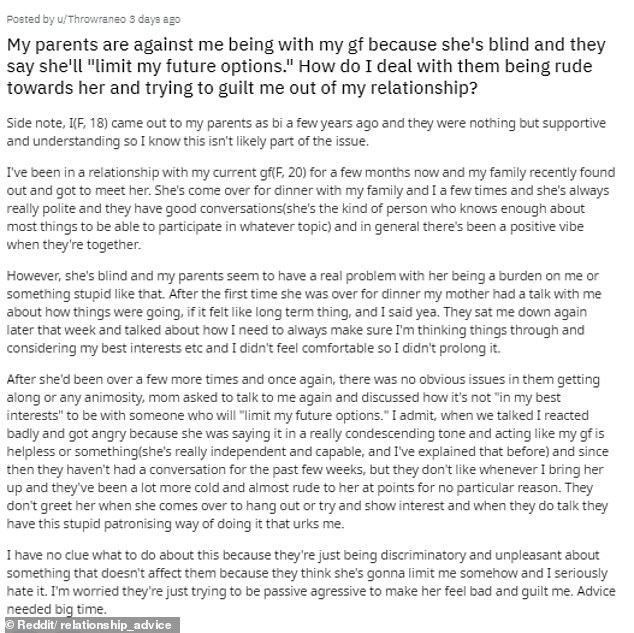 ‘They don’t greet her when she comes over to hang out or try and show interest and when they do talk they have this stupid patronising way of doing it that irks me.’

She received an overwhelming response from commenters urging her to educate her parents and continue the relationship.

One person wrote: ‘I’m not an expert in anything here, but maybe your parents really do think the blind are completely helpless. There’s certain media out there that would support that.

‘Is it possible you can find movies or articles about blind people doing well and living their lives well? Your parents might genuinely not realise that this is a disability that can be successfully lived with and are trying to help you in a very misguided way.’

Another said: ‘Look, your parents are somehow not bigots against bi women but are obviously bigots when it comes to the disabled. It’s not 1464, a blind person can and will lead a productive and healthy life… as they should know from talking to her.

‘You should tell them they’re only going to alienate you if they keep acting in this disgusting way, and make it extremely clear that what they are doing is bigotry. I would also stop bringing your girlfriend over and cut your parents out from you and her’s relationship until they learn some maturity.’

Others suggested the parents could be using the girlfriend’s vision impairment to disguise their disapproval of her relationship with a woman.

‘I developed a degenerative form of arthritis when I was 25 and told my BF (nos husband) that if it was too much for him, we could break up. I would understand. Well, we didn’t and just worked through things as they came our way.

‘I cannot keep up with my husband physically anymore, but that doesn’t mean I’m holding him back or limiting his options. If he wants to do something I cannot do, he does it without me.

‘Life isn’t one size fits all and your parents are in for a rude awakening. Though I do wonder if they are secretly upset you’re dating a woman and are using her blindness as a way to not look homophobic,’ wrote one.

‘Another said: ”Limiting future opportunities’ you know what else can be limiting? Being part of the LGBTQ+ community. Your parents seem to be like those parents who are supportive of certain groups of people… as long as it’s not in their family. They seemed okay with her until you told them the relationship could be long term.

‘Your parents are disgusting treating your girlfriend like she’s mentally disabled just because she can’t see. I think you need to drill it into them that you and your girlfriend are a packaged deal. “If you can’t accept her, then you don’t accept me. Talk to me when you’ve grown up”.’