Women are working out in a new style of skintight, flesh-coloured bike shorts that match skin so closely, it appears they are ‘naked’ from the waist down.

The $52 ‘Force Scrunch Shorts‘ from Australian activewear brand Echt come in 15 colours, including four neutral shades that match a range of skin tones.

But if the fabric of the high-waisted, figure-hugging pants is too similar to the body, it tricks the eye into seeing ‘bare’ legs and bottoms at first glance.

And when the shorts are worn with the matching $52 sports bra, the set creates the illusion that the wearer is completely nude – save for their socks and sneakers. 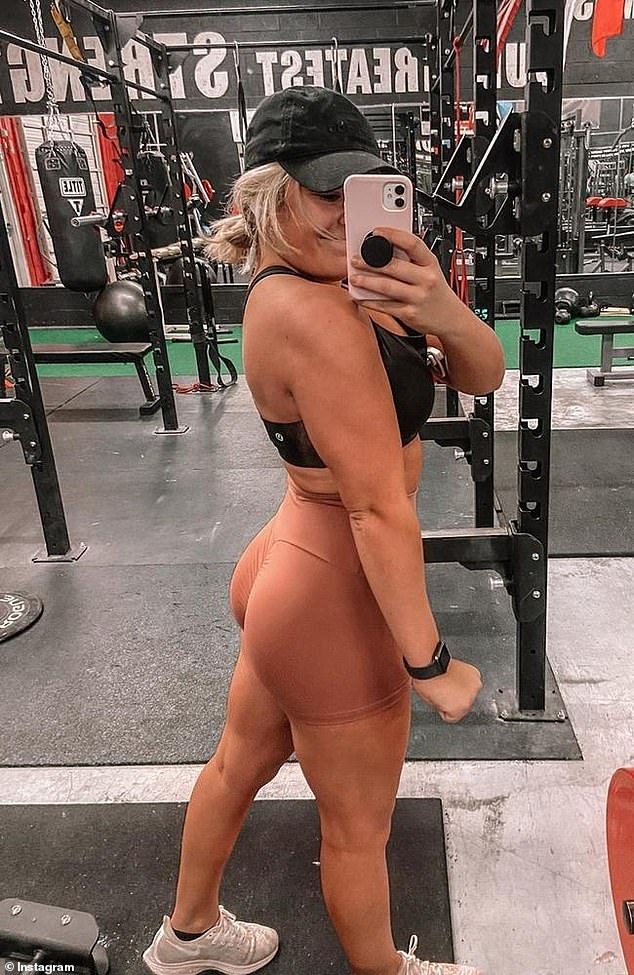 ‘It’s like wearing nothing at all!’ Women are exercising in a new style of skintight, flesh-coloured shorts (pictured) that match skin so closely, it appears they’re naked on the lower half 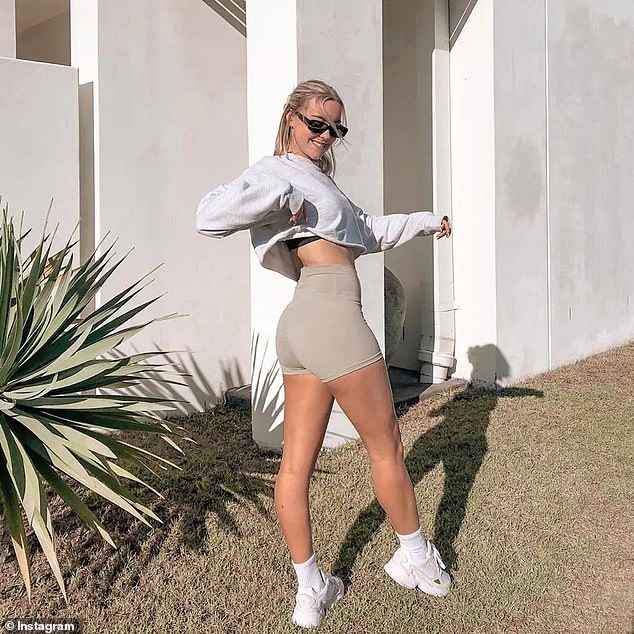 Models and fitness influencers have been wearing the formfitting shorts in Instagram photos which are raising eyebrows as people ‘double take’ to confirm the women are not half – or fully – undressed.

Would you work out in ‘naked’ bike shorts?

‘Honestly thought you were naked for a second,’ one woman wrote under a Brisbane blogger’s mirror selfie.

Another said she ‘had to take a second glance’ before realising the model was actually wearing something on her lower body.

The shorts are also available as full-length leggings, currently reduced from $60 to $30 on Echt’s official website.

Not for the faint hearted, this new style of exercise shorts has already caused controversy after a power lifter was asked to leave a Sydney gym for wearing them. 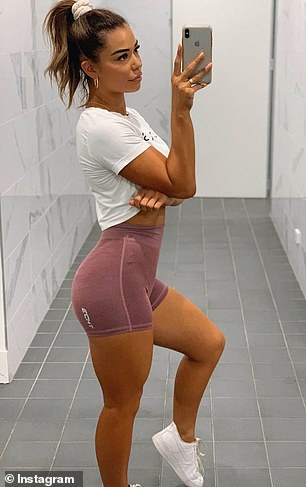 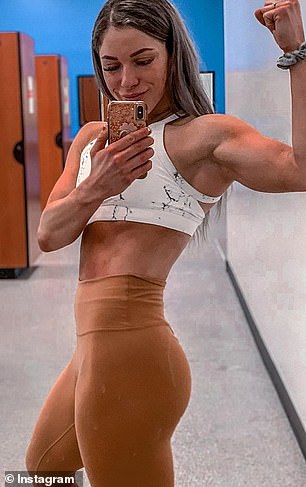 Gym goers wear the $52 ‘Scrunch Force Shorts’ (left) and figure-hugging leggings (right) from Echt, which are currently reduced from $60 to $30 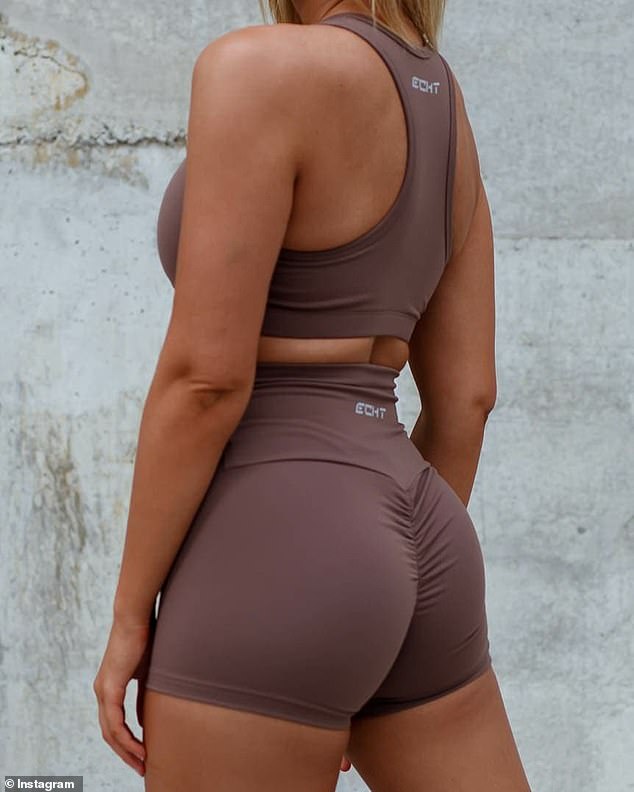 When the shorts are worn with the matching $52 sports bra, the set (pictured) creates the illusion that the wearer is completely nude – save for their socks and sneakers

Gabi Goddard was working out at a studio on the North Shore on August 14 when she was approached by by a member of staff who asked her to go home and change into different clothes if she wanted to continue her session.

When she asked why, the 27-year-old was told a teacher chaperoning a group of teenage pupils at the facility was concerned about the children being distracted by her revealing ensemble.

Enraged, Gabi shared the scathing complaint she sent to the school principal in an Instagram post which quickly went viral.

But she’s since discovered it was the gym owner who took issue with her outfit after mistakenly believing she was wearing scanty lingerie on the outside of her shorts due to the ruched design stitched across the back. 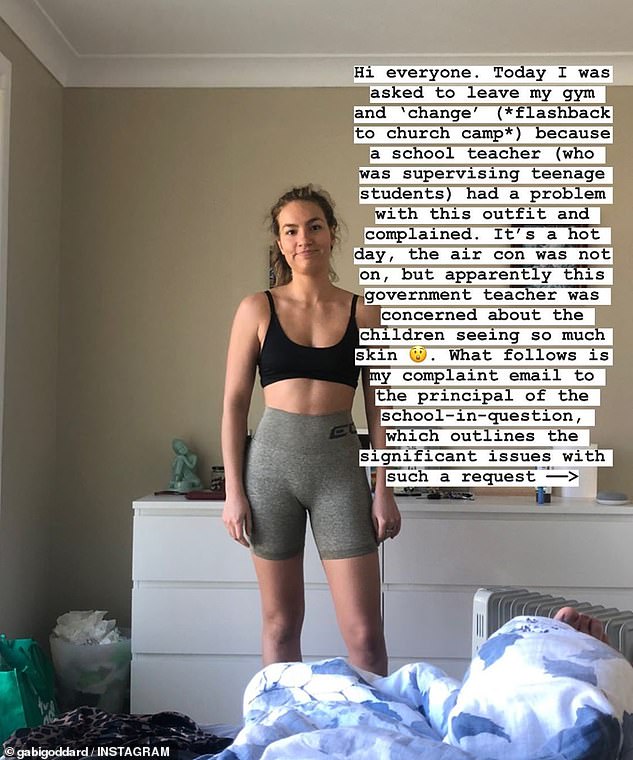 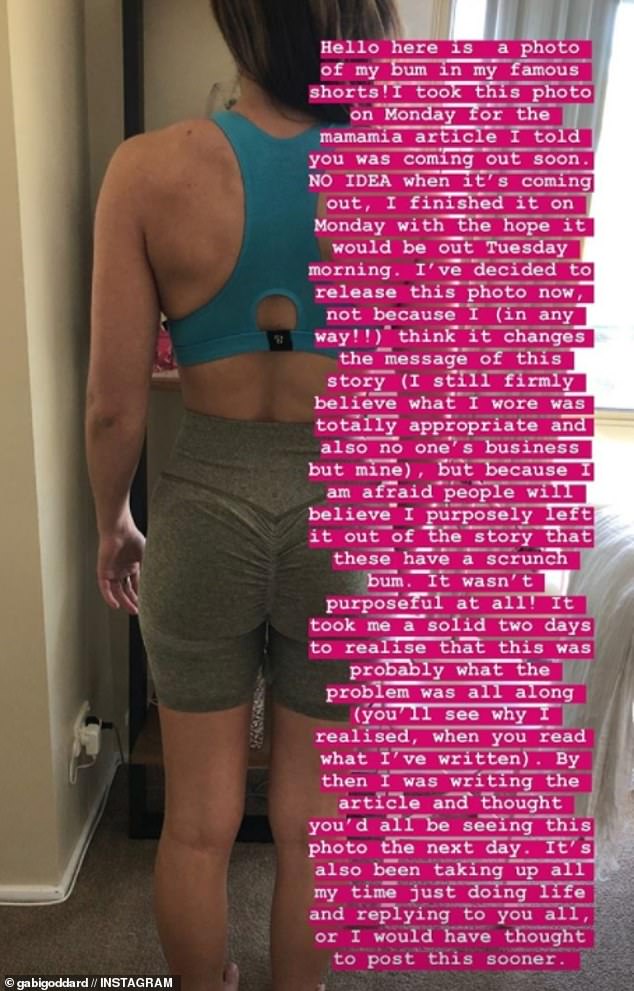 She’s since discovered her ‘scrunch bottom’ cycling shorts (pictured) – ruched across the back to accentuate the behind – were on inside out, making it look like she had a G-string over them

In a piece for Mamamia, Ms Goddard revealed staff had initially asked if she was wearing a G-string.

Unaware that her shorts were on inside out, she said the question ‘dumbfounded’ her as she couldn’t comprehend why she was being asked about her underwear.

‘G-strings are all I ever wear; they’re comfortable and I like having no lines underneath my clothing. Wait, this is INSANE. Why am I defending my underwear choices to the gym,’ she said.

The owner then explained how the ruched design on the back of her shorts – specifically designed to enhance the behind – made it look as if she had slipped underwear on over them, and asked if she had clothes she could change into or a towel to wrap around her waist.

Ms Goddard replied that ‘it would be difficult to deadlift in a towel’ and agreed to leave before raising the matter in a complaint to the school principal.

The principal apologised for any ‘distress’ but insisted the issue had not been instigated by a teacher, prompting Ms Goddard to speak with the gym owner who admitted she had taken issue with the shorts all along.

Inside-out fabric notwithstanding, Ms Goddard doubled down and declared: ‘I still firmly what I wore was totally appropriate and also, no one’s business but mine.’

She said she has worn the outfit, which was in ‘no way gratuitous’ nor violated any dress codes, at countless other gyms and never received a single complaint.