While much of Hollywood appears to still be in lockdown mode, actress Zoe Saldana is making sure to enjoy a well-deserved break.

On Sunday – over a sizzling hot Labor Day Weekend in Los Angeles – Zoe, 42, was pictured splashing around with her husband-of-seven-years Marco Perego Saldana, 41, who famously took his wife’s last name when they tied the knot in 2013.

The married couple have been spotted in Malibu, California, over the last few days spending time at the ocean with their three children, five-year-old twin sons Bowie Ezio and Cy Aridio, and another son Zen, three. 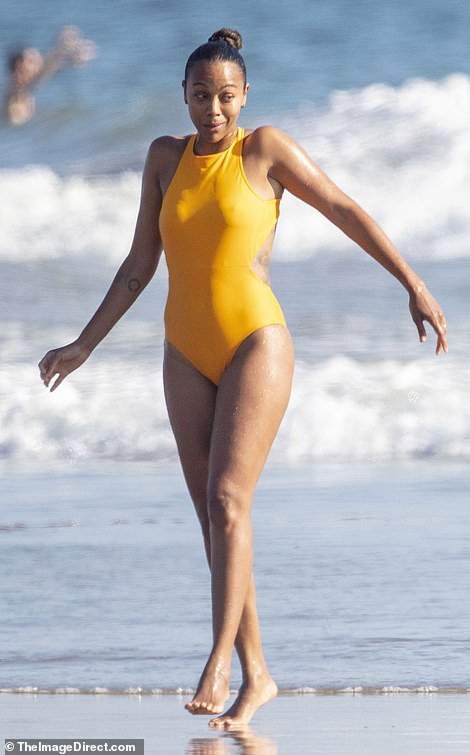 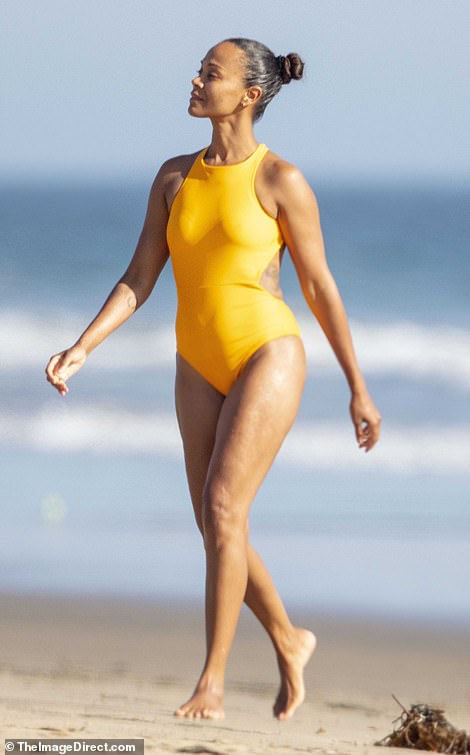 Mellow yellow! Zoe Saldana, 42, looked sensational as she splashed around a beach in Malibu, California on Sunday, as she enjoyed Labor Day Weekend with her husband Marco

Last week, the Guardians of the Galaxy star shared a rare snap of herself with her brood, as they all appeared to be dressed in wet suits ahead of some fun in the ocean.

She wrote alongside the snap: ‘Nothing brings me more joy than loving on my boys all day long. To ensure I can protect my kids’ future, I am taking a stand against climate change and making a pinky promise to ‘vote like a madre.’

Zoe added: ‘All the madre’s out there, will you join me?’ 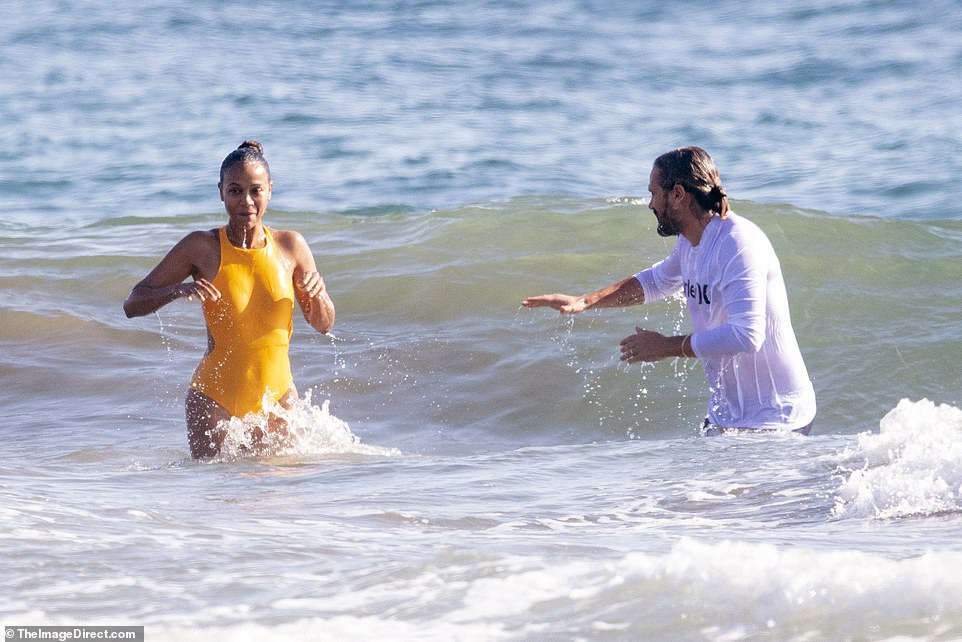 Bliss: Zoe was pictured splashing around with her husband-of-seven-years Marco Perego Saldana, 41, who famously took his wife’s name when they married in 2013 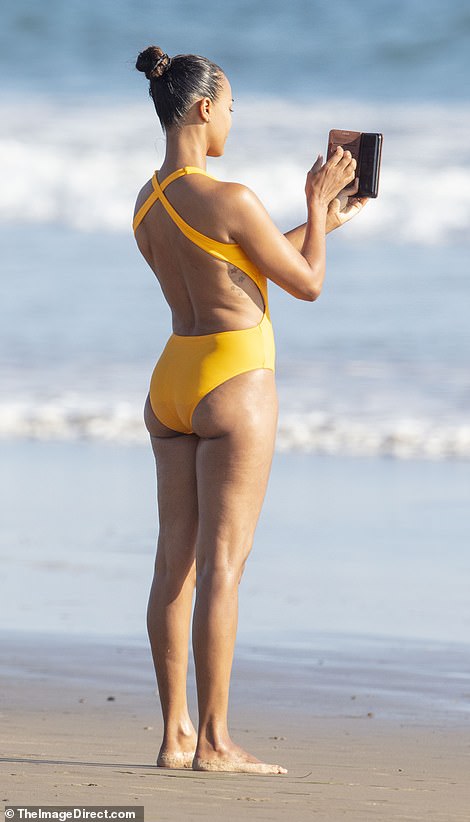 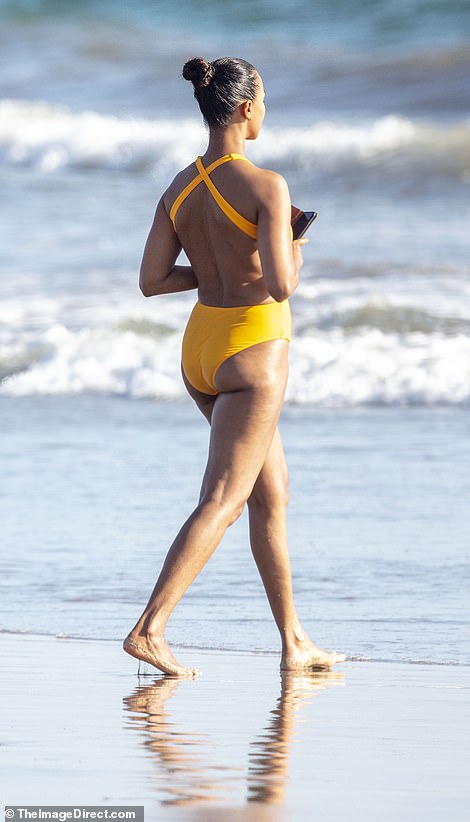 Capturing precious moments: The Avatar star took a moment to take in the view of the ocean with a snap on her iPhone 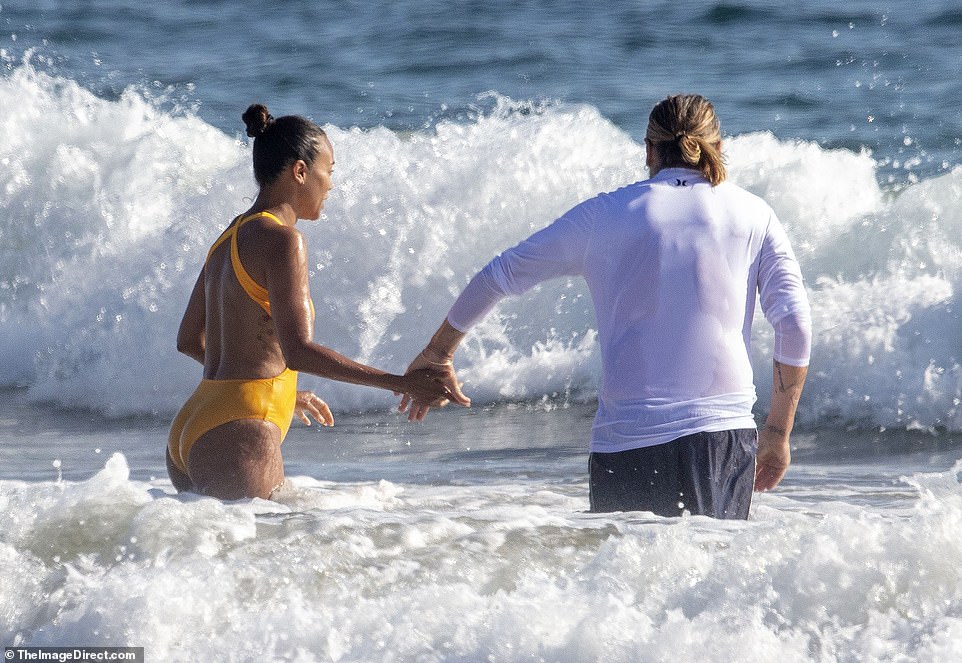 Still going strong: The loved-up pair were seen holding hands as they battled through strong waves together 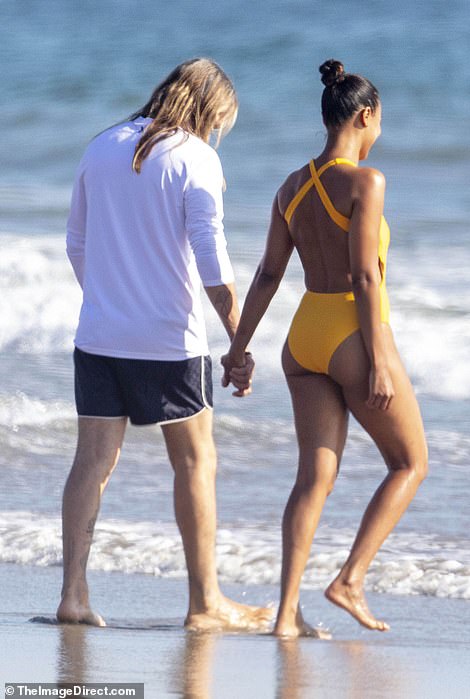 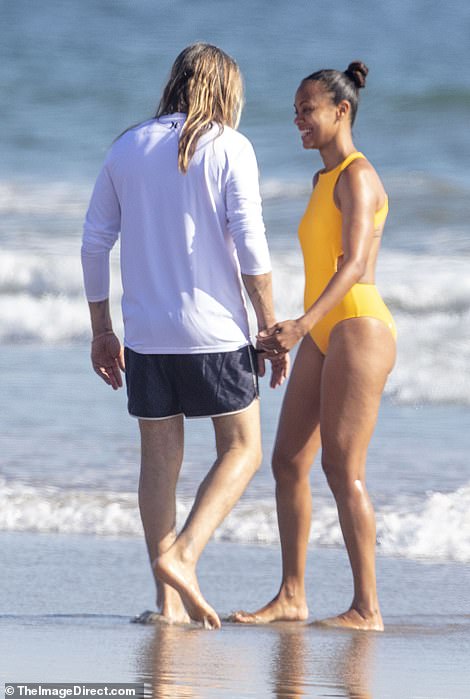 The married couple have been spotted in Malibu, California, over the last few days spending time at the ocean with their three children, five-year-old twin sons Bowie Ezio and Cy Aridio, and another son Zen, three. 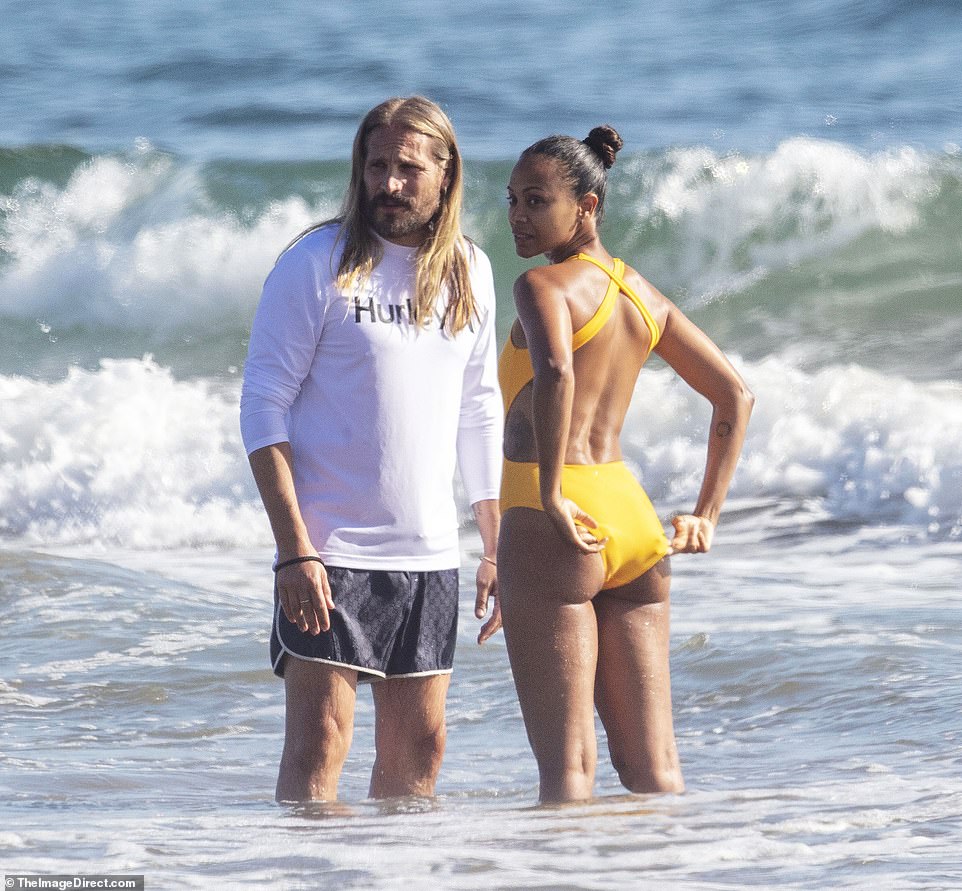 Union: The Blood Ties actress and beau Marco secretly tied the knot in London in June 2013 in front of just family and friends

Last year, the Avatar star explained how she and her husband Marco have been raising their children in a gender-neutral environment, shying away from making their sons only play with toys that are aimed at boys.

‘We have a very gender-neutral environment where my husband participates in a lot of tasks that were normally given to women and vice versa,’ she said in an interview with UsWeekly.

‘I get to do a lot of male things, which is, I don’t know, put the TV together, fix things that break. We’re sort of a very gender-fluid household. I think it’s important to raise boys in that environment, and girls as well.’ 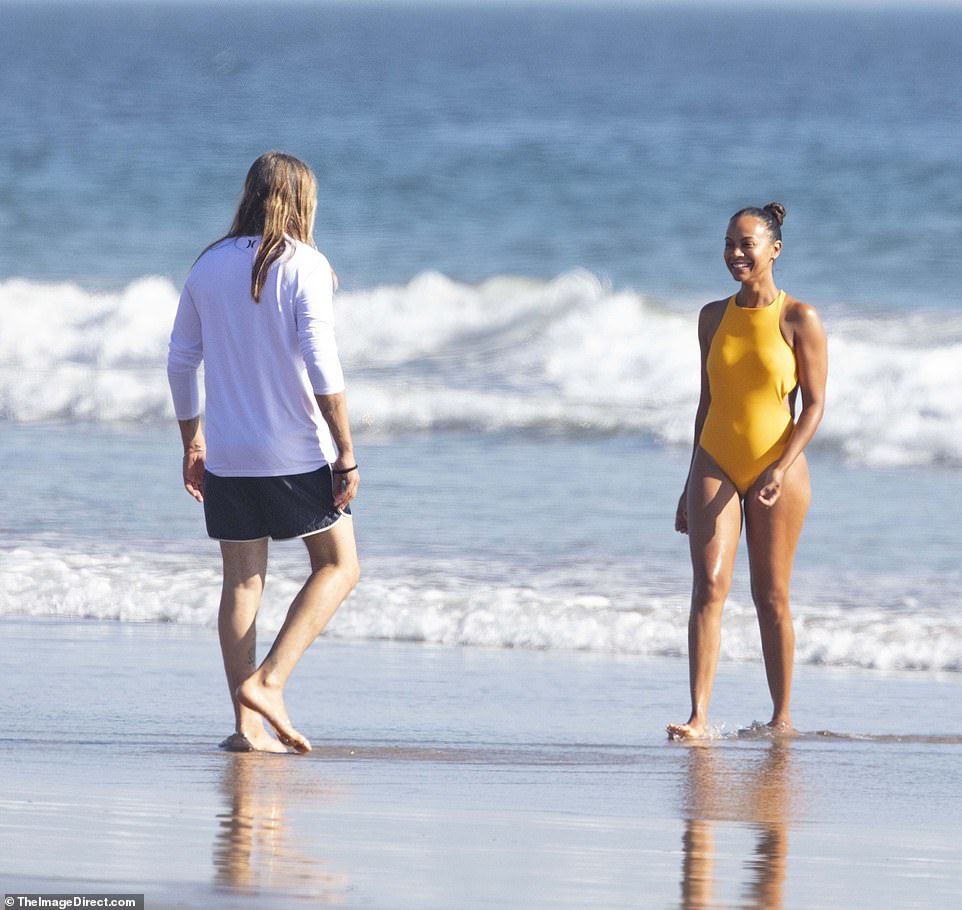 True love: The married couple looked like honeymooners as they gazed at one another while on the beach

Meanwhile, despite lockdown, Zoe is still as busy and in-demand as ever, currently filming not one but two sequels of the hit sci-fi epic Avatar.

Even though the first film – Avatar 2 – won’t hit cinemas until December 2021, Zoe has been hard at work reprising her role of Neytiri alongside cast members Sam Worthington, Kate Winslet and Cliff Curtis.

In May, the official Avatar account shared a snap of Zoe, Sam, Kate and Cliff on an underwater set, where they were filming performance capture work. 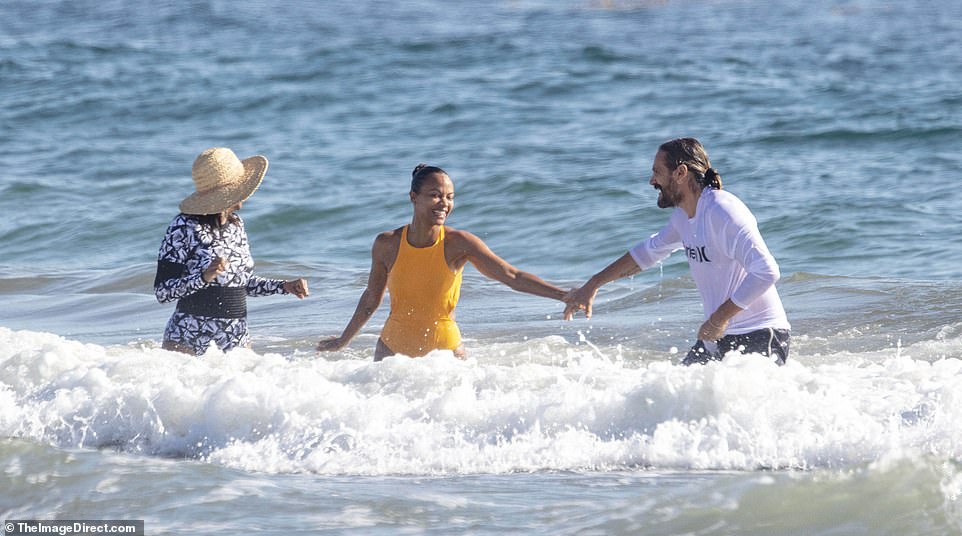 Group fun: The pair also appeared to be joined by another family member on their day out 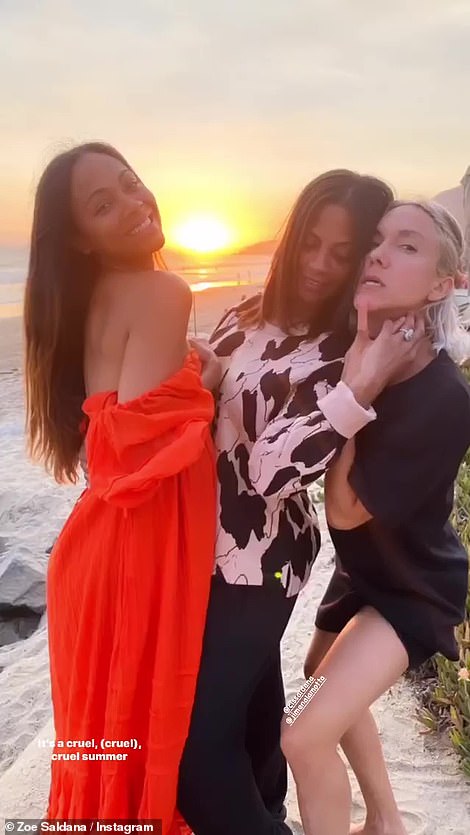 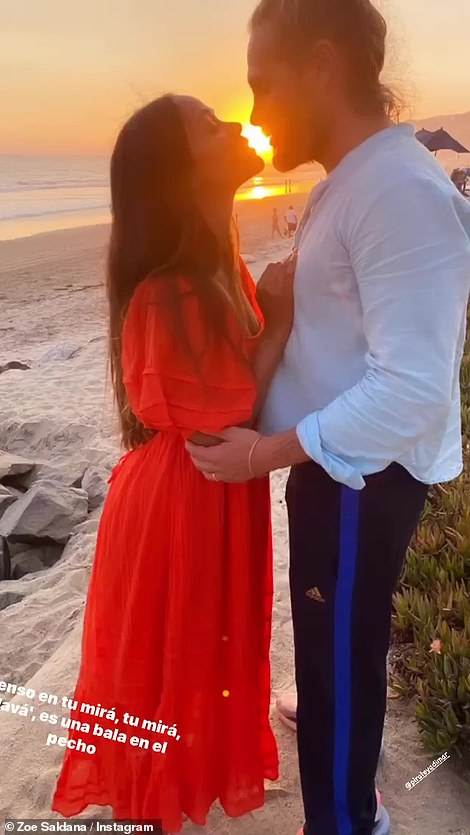 Last days of summer: Zoe, Marco, and their pals, all appear to have been spending the last few weeks in Malibu together 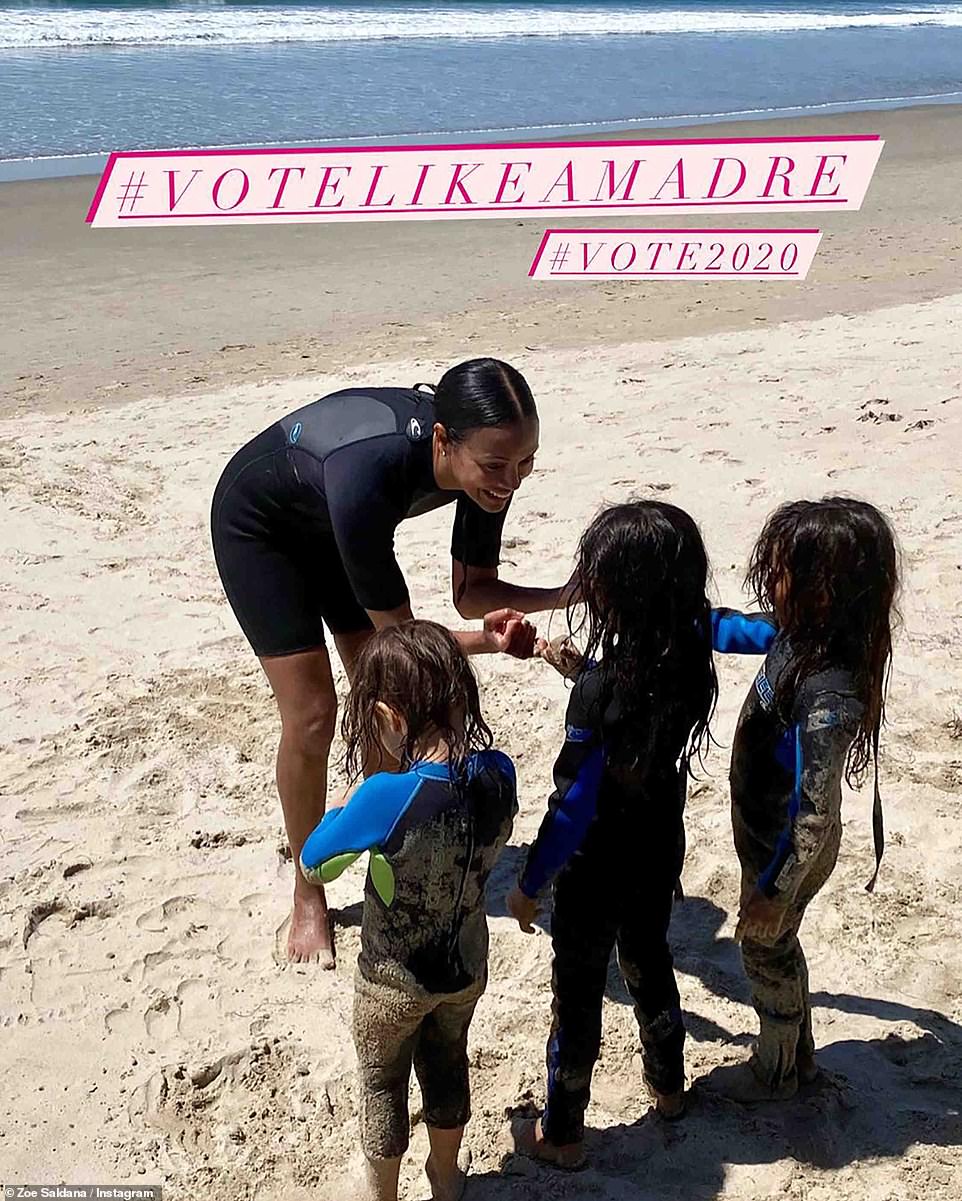 Cute family: Zoe has been spending time at the ocean with their three children, five-year-old twin sons Bowie Ezio and Cy Aridio, and another son Zen, three (pictured above last week)

‘From the set of the sequels: Zoe Saldana, Sam Worthington, Kate Winslet, and Cliff Curtis taking a break from underwater performance capture for a quick photo,” the official Avatar movie account tweeted.

‘Fun fact: Much of the performance capture took place in this 900,000 gallon tank, built specifically for the sequels.’

It’s been a long ride for Zoe and the cast, as the production on the two movies shut down in March due to the coronavirus.

However, they were able to start back up in New Zealand, where the country as a whole has handled the pandemic a lot better than the US, thanks to female prime minister Jacinda Aldern. 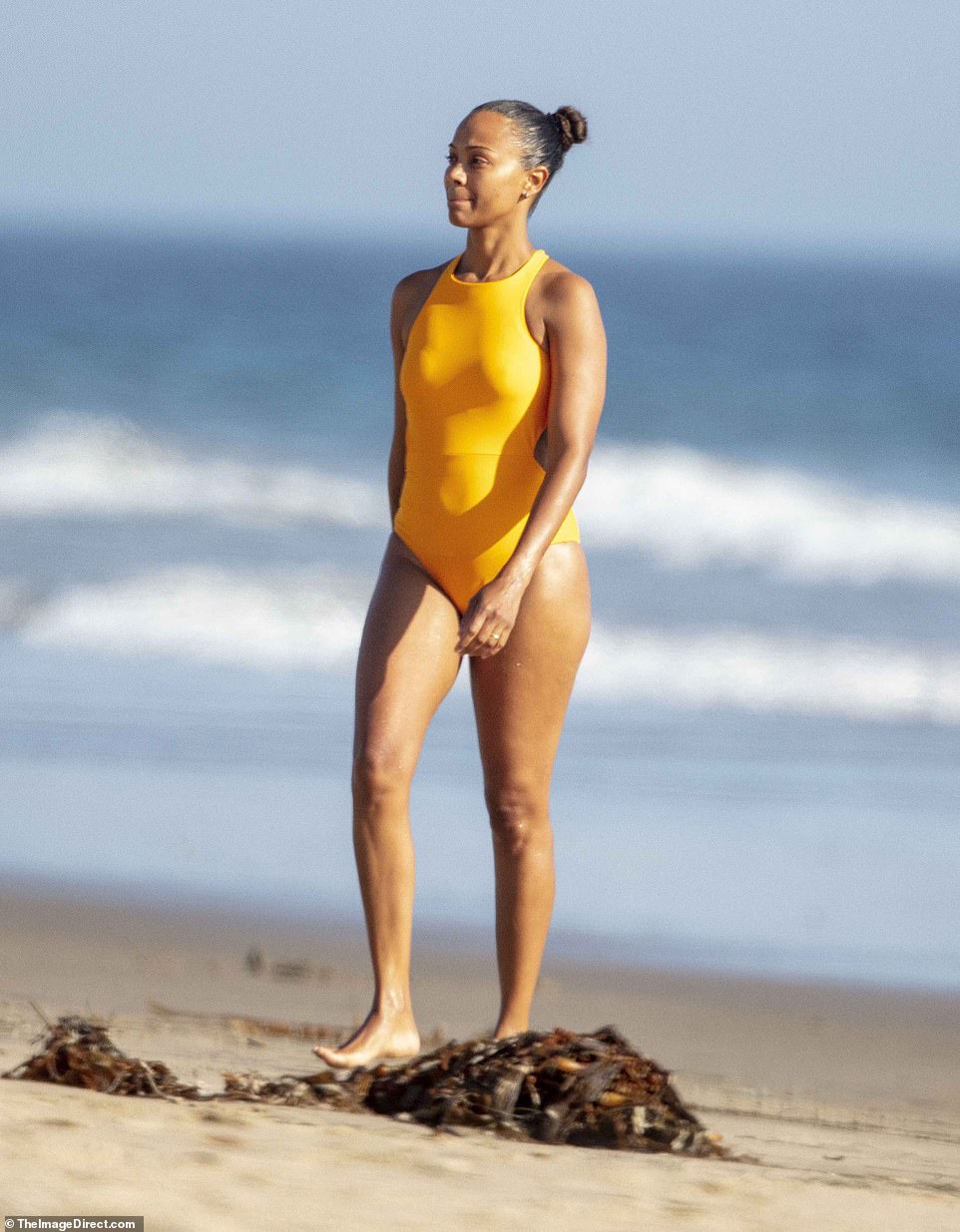 Fine form: The star showed off her incredible beach body on the weekend trip out to Malibu