President Donald Trump pushed for aggressive forest management to combat the wildfires on the West Coast Monday but California Gov. Gavin Newsom told him climate change is real and behind the destructive blazes.

‘There has to be good strong forest management. So hopefully they’ll start doing that,’ Trump said when he landed in Sacramento.

He argued forest management could do a lot to help. Many Democrats, including Califorina Gov. Gavin Newsom, have blamed climate change for the fires.

‘We come from a perspective, humbly, where we submit the science is in and observed evidence is self-evident — that climate change is real,’ Newsom told Trump in a briefing on the fires. The president has denied climate change in the past. 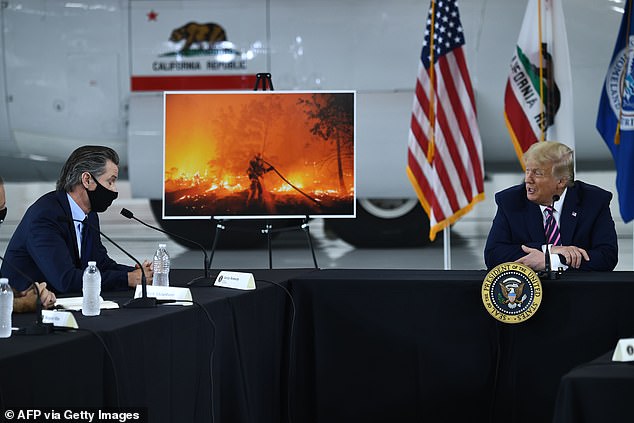 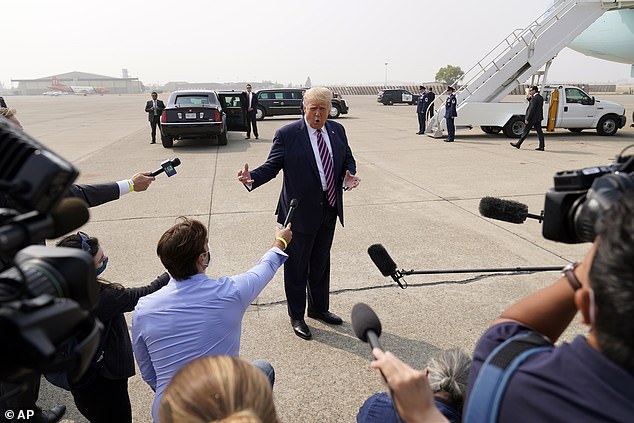 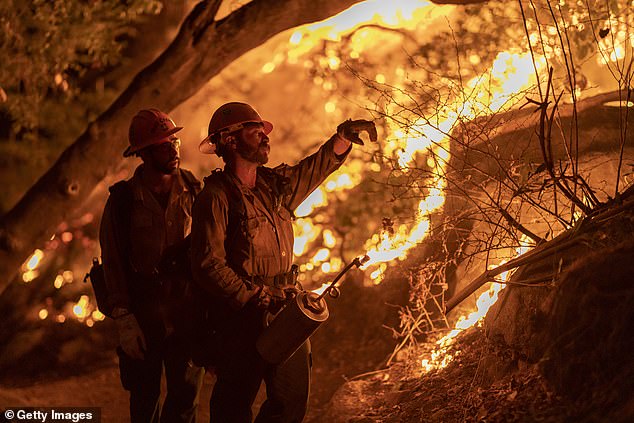 Mill Creek Hotshots set a backfire to protect homes during the Bobcat Fire on September 13, 2020 in Arcadia, California

Trump has been focused on forest management as the key to solving the fires.

‘When trees fall down after a short period of time they become very dry — really like a matchstick… and they can explode. Also leaves. When you have dried leaves on the ground it’s just fuel for the fires,’ Trump said.

He said other nations use forest management successfully.

‘You go to Europe,’ he said. ‘They’re very, very strong on management, and they don’t have a problem. They really don’t have, with, as they say, more explosive trees than we have in California.’

‘You go to many different countries. I was talking to the head of a foreign country and they said, ‘We consider ourselves a forest nation. We have trees that are far more explosive than they have in California and we don’t have that problem,’ he noted.

Trump was briefed on the fire at an airport hanger with Newsom at his side – wearing a face mask – and photos of the blaze behind him. The nearest fire is about 60 miles away but the airport has served as a base of operations for officials battling the blazes in this area.

The president acknowledged he and Newsom have had a rocky relationship but said they were working well together to get federal aid to the affected areas.

‘I know we come from different sides of the planet; but we actually have a good relationship. Good man,’ Trump said.

Newsom agreed Trump’s argument for forest management has merit but also argued that climate change, which the president has denied in the past, played a huge role.

‘A month ago – literally to the day – we began to have a series of 14,000 lightning strikes over a three day period, 1100 fires sparked in the last month 2.8 million acres, just in the last 30 days in very unprecedented California history,’ he said.

He thanked the president for voicing the politics of the situation.

‘We can agree to disagree I appreciate your frankness on the politics of this,’ the Democratic governor said. ‘There’s no question, joining us in this decade as almost 1000 plus years that we have not done justice to forest management,’ Newsom noted.

‘Please respect – and I know you do – the difference of opinion now here,’ Gavin said as Trump nodded.

Both presidential campaigns turned their attention to the wildfires on Monday with President Trump in California for a briefing on the blazes and Joe Biden speaking about them in a speech in Wilmington.

The president, at campaign rallies in Nevada over the weekend, repeatedly said the fires are about ‘forest management,’ a characterization he has repeatedly offered of such blazes. 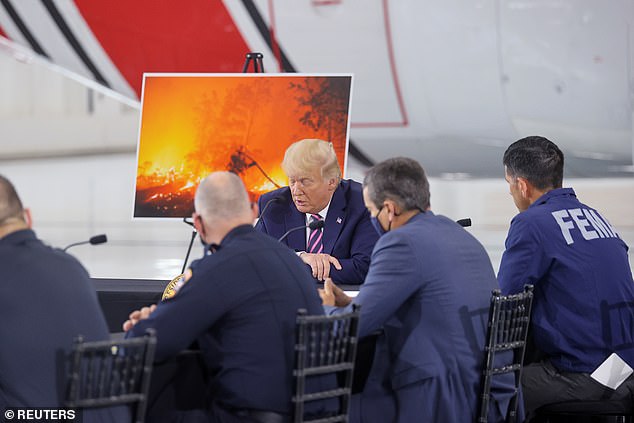 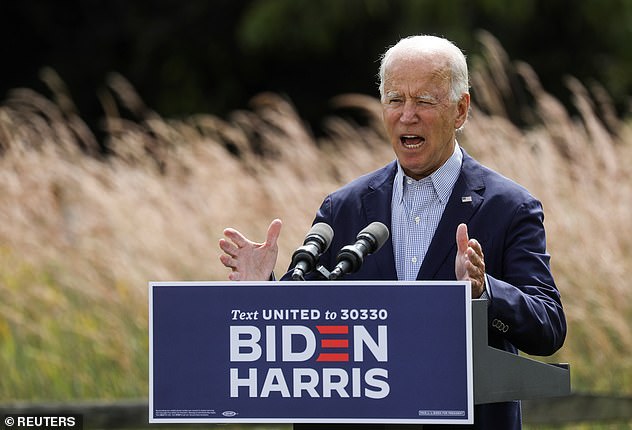 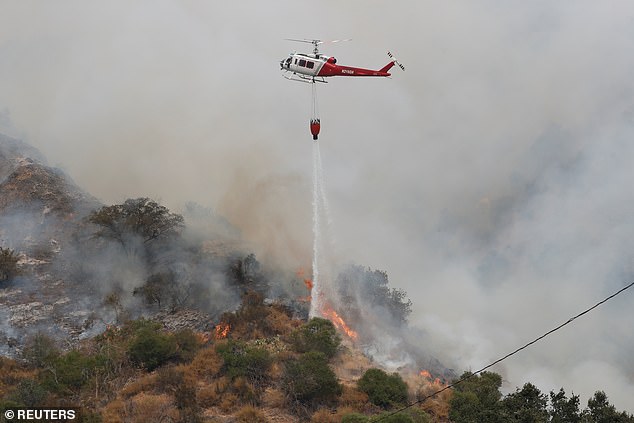 A helicopter drops water to help extinguish the Bobcat Fire, in Arcadia, California 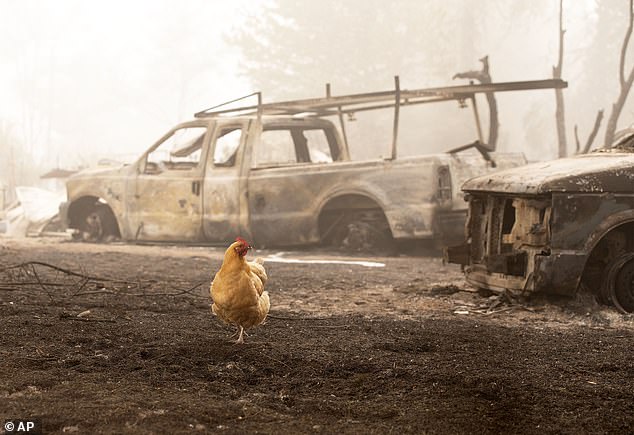 ‘This is climate change, and this is an administration that’s put its head in the sand,’ Garcetti said.

‘Talk to a firefighter if you think that climate change isn’t real… This isn’t about forest management or raking,’ he added.

And Inslee on Sunday called climate change ‘a blowtorch over our states in the West.’

‘It is maddening right now that when we have this cosmic challenge to our communities, with the entire West Coast of the United States on fire, to have a president to deny that these are not just wildfires, these are climate fires,’ Inslee said on ABC´s ‘This Week.’

Trump pulled the United States out of the Paris Climate Accord, which laid out an international approach to combat climate change.

California had its hottest August on record, with world-record-setting heat in Death Valley.

It had 14,000 dry lightning strikes that set off hundreds of fires, some that combined into creating five of the 10 largest fires in the state´s recorded history. And it had back-to-back heat waves.

More than 16,750 firefighters were battling 29 major wildfires across California as of Sunday, according to CalFire, with the most deadly blaze being the North Complex Fire.

The fires have burned 3.3 million acres in the state, caused smoky and hazy weather conditions, and resulted in partial power shutoffs for California residents. More than 4,000 homes have been destroyed.

At least 35 people have died in the fires along the West Coast, including 24 in California, 10 in Oregon and a child in Washington state.

The White House has touted its support for the first responders and fire fighters in the state.

‘THANK YOU to the 28,000+ Firefighters and other First Responders who are battling wildfires across California, Oregon, and Washington. I have approved 37 Stafford Act Declarations, including Fire Management Grants to support their brave work. We are with them all the way!,’ Trump tweeted on Friday night.

President Trump visited California after the 2018 wildfires, touring the area with then-Governor Jerry Brown and then Governor-Elect Gavin Newsom.

He is only in California for a few hours before heading to a campaign stop in Arizona.