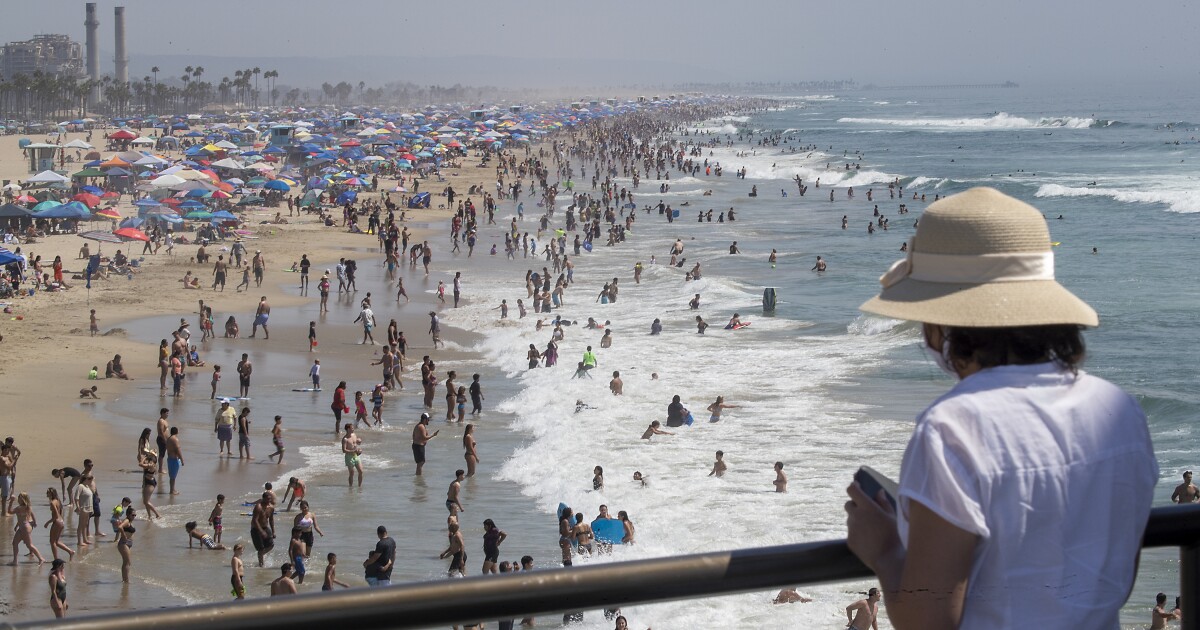 After a weekend of all-time high temperatures, the heat wave gripping Southern California will ease slightly on Monday — but many inland areas will remain in the triple digits.

Temperatures will fall about 10 degrees in many areas Monday. But you might not notice much improvement, given how hot it has been. The National Weather Service said the coast will see the most relief Monday. Inland valleys will still see temperatures in the 105-117 range; foothills will hit the 103-115 range.

Another temperature drop is on tap for Tuesday.

The excessive heat warning that remains in effect for many parts of the region through Monday night is making for explosive conditions for firefighters battling several Southern California blazes.

The Bobcat fire, which started above Azusa in the Angeles National Forest, grew overnight to 4,871 acres amid extreme fire danger warnings. Staff at the Mt. Wilson Observatory were evacuating Monday morning as the fire raged toward the grounds.

Ash from the blaze rained down along the 210 corridor and the Pasadena area and has prompted the South Coast Air Quality Management District to issue a smoke advisory for the foothill communities and into the Santa Clarita Valley through Monday, warning of unhealthy air for sensitive people.

In San Bernadino, the El Dorado fire continued to spread overnight on the northeast edge of Yucaipa. Authorities said the 7,000-acre blaze was started by a “smoke generating pyrotechnic device, used during a gender reveal party” Saturday morning at El Dorado Ranch Park. Authorities implored the public to take every precaution against starting a wildfire.

The Valley fire, roughly 30 miles east of San Diego, also grew overnight, reaching 10,258 acres but remaining 1% contained as the battle to stop its march in rugged East County terrain enters its third day. Monday brings a new tool to the fight: military planes. The California Department of Forestry and Fire Protection is pulling the trigger on a standing agreement with the Navy 3rd Fleet and the 1 Marine Expeditionary Force to use military aircraft on the fire, Cal Fire spokesman Capt. Kendal Bortisser said.

The Valley fire has already destroyed 11 homes and 25 outbuildings in the Japatul Valley southeast of Alpine.

The extreme temperature over the weekend shattered records.

Woodland Hills on Sunday recorded an all-time high of 121 degrees, which the National Weather Service said was the hottest temperature recorded at an official weather station in Los Angeles County.

A woman in her late 40s was hiking on a trail in the Santa Monica Mountains in Calabasas when she began to feel sick and collapsed at 2 p.m. Saturday, said L.A. County sheriff’s Deputy Juanita Navarro.

The hiker was pronounced dead at the scene. The official cause of death is still unknown, Navarro said.

Because of the dangerous heat wave, all trails in the Santa Monica Mountains are closed through Labor Day, Malibu Search and Rescue said in a tweet.

In Angeles National Forest, the Sheriff’s Department search and rescue team performed an air rescue Saturday on a semiconscious hiker suffering from heat exhaustion on the popular Strawberry Peak trail, where temperatures often soar because it has minimal shade in the afternoon.